Incantation in LA in 2012 (more by Adam Murray) 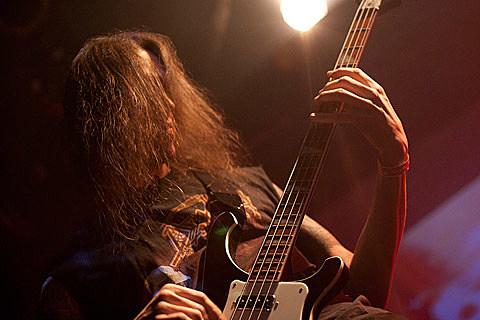 We're up to our neck in Incantation clones, so it's certainly nice to see the real diabolical conquistadors back in action. The Pennsylvanian punishers have a new album on the way titled Dirges of Elysium and it sounds as filthy as ever. The record drops via Listenable Records on June 24 (preorder). Of course, as bands with a new record often do, Incantation are also hitting the road. They'll be playing dates with Macabre.

Indeed, Incantation and the serial-murderer-obsessed death/thrashers from Illinois have scheduled shows together to happen this summer. It's something of a special jaunt for the death-/grind-influencing Macabre as their 'murder metal' turns 30 this year. The band has cut a slew of fun records, but they're a special treat live. Incantation, too, excel in the concert element, with John McEntee providing some of the best death metal song intros in the scene. Sorry, let me rephrase that: BEEEEEEEEEST DEATH METAL INNNNNNNNNNNNNNNTROS IN THE SCEEEEEEEEEEEEEEEEEEEEEENE. A full tour hasn't been announced yet, but a few dates for this monstrous bill have popped up including a NYC show happening on June 30 at Saint Vitus. Tickets for that show are on sale now.

All currently known dates are listed, with a couple live videos of these two shaking their surroundings, below...