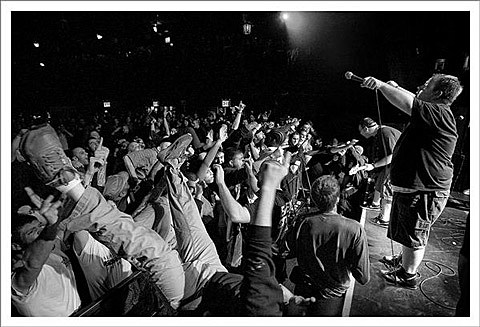 NYC hardcore band Indecision technically threw in the towel in 2000, but since then the band (which contains members of Most Precious Blood, The Judas Factor, Millhouse and others) has periodically gotten back together for one off dates (like they did in 2008). The band is back again and have scheduled an NYC show at Knitting Factory on July 10th with Backtrack, Incendiary, (who are playing Black & Blue Bowl this weekend) and Thirsty!. Tickets are on sale.

Touche Amore killed it last week at Santos (and at Red 7 in March), and will be back again to whip the crowd into a frenzy when they support Strike Anywhere and Bane alongside Lowtaker at Knitting Factory on June 20th. Tickets are on sale.

And finally Off With Their Heads will headline Knitting Factory alongside Dear Landlord, Detournement, and Dirt Bike Annie on June 23rd. Tickets are on sale. OWTH will welcome their new LP and Epitaph debut, In Desolation, via Epitaph Records on June 8th.

Full Off With Their Heads and Strike Anywhere dates are below...

Bane THIS IS HARDCORE FEST2009 Philly "Ante Up"

Off With Their Heads - "Drive"