photo: Indian Handcrafts at MHOW in 2014 (more by Amanda Hatfield) 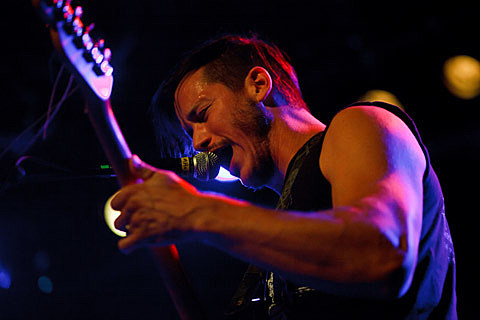 Ontario-based stoner rock weirdos Indian Handcrafts are releasing their new album Creeps this week via Sargent House, and it's streaming right now. Creeps is probably the heaviest release yet from these guys and also the most musically varied. They have a sound that's harder to pin down than you might expect, and they dip their toes into all sorts of subgenres over the course of the album, with little stabs of prog, psych, and even some crunchy death metal thrown into the sludgy mix. The whole thing is streaming below, and its definitely worth a listen.

Greys just finished touring with the band formerly known as Viet Cong, and as we mentioned they have a new EP called Repulsion on the way and will be playing CMJ in November. Since we last spoke, it was announced that their CMJ is the Exploding in Sound showcase, which goes down in the afternoon on October 16 at Palisades and also includes Palehound, Big Ups, LVL UP and many more (full lineup below). Tickets for that are on sale now.

All tour dates for both Greys and Indian Handcrafts, and streams of Creeps and one of the songs from Repulsion, below...