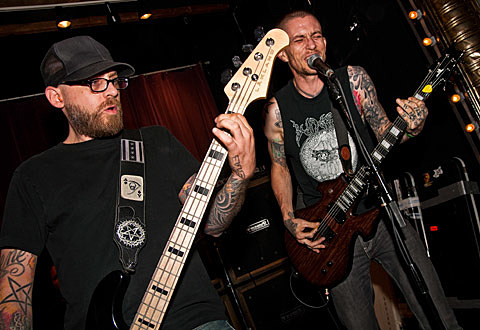 After killing Union Pool in June with Bloodiest and Hallux, Indian will return to NYC on 9/23 to play Public Assembly with Batillus, Castevet, and Alkahest as part of the latter's record release celebration for Milk & Morphine.

Meanwhile, Castevet will play Saint Vitus tonight (8/5) as part of a bill with The Communion and Artificial Brain, a show that originally included Oregon's Transient who has since dropped off:

On Saturday, while driving to Savannah, Georgia, local grindcore band Transient was involved in a head on accident when a SUV jumped the median and crashed into the band's van. Singer Krysta Martinez was airlifted to a local hospital but should be fine following surgery. The band is currently stranded in Georgia with a totaled van (plus a mountain of medical bills), so they are accepting donations via PayPal. -[Portland Mercury]

The show will now serve as a benefit for the band, so get out and check out good bands for a good cause.

In somewhat related news, Will from Indian served as second guitarist for Wolves In The Throne Room who will hit the road for a string of dates that will include The Bell House on Sept 12th with Thou. Tickets are still on sale.