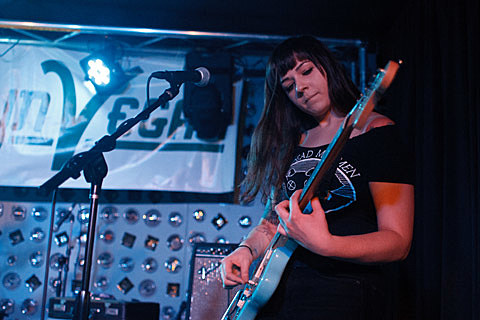 Indie Pop Prom is one of three chances you'll have to catch Radiator Hospital in NYC this February, including their show with The Marked Men and the Double Double Whammy showcase.

Not that the whole lineup isn't worth highlighting, but one especially exciting thing is that Places to Hide will finally make it to NYC from Atlanta. Back in 2013, they released a terrific album, Almost Nothing, which you can download (name your price) at bandcamp and stream in full below. The band tag the album as "90s," "punk," "emo," "indie pop," "indie rock," "stoner," "surf," and other things, and though those tags usually describe pretty different sounding bands, they kind of do all apply to Places to Hide. If you ever wondered what "stoner emo indie pop" would sound like, it might be this.

Streams Almost Nothing, along with music from the rest of the lineup, below...

Places to Hide - Almost Nothing

Bad Banana - "Stand Next To Me"