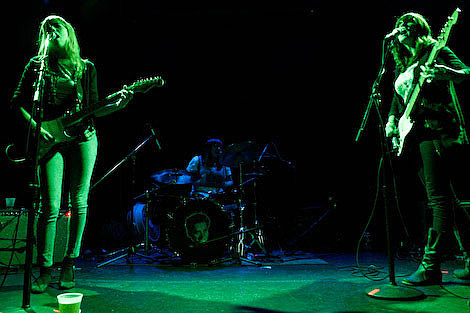 As we pointed out back in April, and further confirmed in a list of Abe Vigoda tour dates, The Whitney is hosting some indie rock shows this July, in conjunction with their Dan Graham Retrospective. And the full schedule looks something like this:

The Feelies show is "Free with Museum admission (free for Whitney members)." and "Tickets for this [Feelies] concert are available day of show only, beginning at 1 pm at the Museum. Space is limited; tickets are first-come, first-served." The other four shows basically say the same thing, but just, "Free with museum admission. Seating is first-come, first-served. No reservations." More details below.

Other programs include "Dan Graham in Conversation with Glenn Branca" and a family performance of Rock and Roll Ice Cream by Japanther. Full schedule below...

Five indie-rock concerts, two artists' talks, a film screening, and a punk-rock family program are being presented as part of Dan Graham: Beyond, the retrospective of the pioneering artist opening June 25 at the Whitney Museum of American Art. Among the highlights is a rare acoustic performance by The Feelies on Friday, June 26, at 7 pm, and four concerts on Friday evenings in July, each celebrating Graham's love of rebellious, underground rock music. These concerts will spill out of the Lower Gallery into the Sculpture Court and feature a cross-section of raucous young post-punk, psych-pop, no wave, and shoegaze bands, the heirs of New York's art-rock scene, including Vivian Girls, Titus Andronicus, and Abe Vigoda. More information follows below and is available at whitney.org.

Although Graham has been a central figure in contemporary art since the 1960s, this is his first American retrospective. It traces the evolution of the artist's work from early conceptual projects and performances to his films and videos, sculptures, architectural projects and pavilions, as well as his groundbreaking collaborations with musicians and bands such as Sonic Youth and Japanther.

For the exhibition's programs, guest programmer/artist Howie Chen was invited to interpret Graham's work in a series of events under the title "My Turn." Chen approaches Graham's art through musicians, filmmakers, and performers to provide a new and insightful look at the artist. In addition to The Feelies performance (June 26), events include a conversation between Dan Graham and Glenn Branca (Sept 12); a screening of Put Blood in the Music, a rock-doc on the downtown music scene of the 80s, introduced by filmmaker Charles Atlas (Sept 17); and a roundtable symposium (Oct 1). Chen is co-founder of the curatorial partnership Dispatch and a member of the collaborative New Humans.

Following is the line-up of Dan Graham-related events; all events take place at the Whitney Museum, 945 Madison Avenue, unless otherwise noted.

Acoustic Evening with The Feelies, part of the "My Turn" series
Friday, June 26 at 7 pm
The Feelies, one of the most influential rock bands of the past three decades, play a rare acoustic set. This performance presents the group's legendary complex guitar layering, driving rhythms, and drone passages.
Free with Museum admission (free for Whitney members). Tickets for this concert are available day of show only, beginning at 1 pm at the Museum. Space is limited; tickets are first-come, first-served.

Abe Vigoda / Grooms
Friday, July 17 at 7 pm
Part of the LA scene centered around The Smell, Abe Vigoda emerges from a shared background of punk, no wave, and pop. Alternating from melodic and tropical to hardnosed and heavy, Abe Vigoda's sound is equal parts Beefheart and My Bloody Valentine with a haunting pulse and a DIY attitude all its own. myspace.com/abevigoda

Vivian Girls / These Are Powers
Friday, July 31 at 7 pm
Although the Vivian Girls have only been a band for a short while, their charms have already worked magic on the road to "out of nowhere" status. Mixing 60's girl-group sounds, punk, and shoegaze, Vivian Girls -- Ali Koehler (drums), Kickball Katy (bass) and Cassie Ramone (guitar, lead vocals) -- make gritty, lo-fi, aggressively fun pop tunes. myspace.com/viviangirlsnyc

These Are Powers are a Brooklyn- and Chicago-based trio featuring Anna Barie (vocals, electronics), Pat Noecker (prepared bass, vocals), and Bill Salas (electroacoustic drums, vocals). Pummeling their way through live performances, These Are Powers use club beats, found sounds, pulses, and blips, to create a chaotic collage of vibrations. myspace.com/thesearepowers

Dan Graham in Conversation with Glenn Branca, part of the "My Turn" series
Saturday, September 12 at 7 pm
Dan Graham joins avant-garde composer and musician Glenn Branca for a conversation about past collaborations, rock music, and shared interests working in New York City. This evening also includes a screening of Westkunst (Modern Period): Dan Graham Segment (1980) by Dan Graham and Ernst Mitzka.
This program will take place at X Initiative, 548 West 22nd Street. This is a free event. No reservations. Space is limited; first-come, first-seated.

Put Blood in the Music, part of the "My Turn" series
Thursday, September 17 at 7 pm
Introduction by director Charles Atlas
This is a rare U.S. screening of Put Blood in the Music (1989), a documentary on the late 1980s downtown New York music scene, featuring early performances by Sonic Youth, John Zorn, Hugo Largo, and Ambitious Lovers and appearances by Dan Graham, Glenn Branca, Karen Finley and others. Experimental filmmaker, video artist, and director Charles Atlas will introduce his film.
This program will take place at X Initiative, 548 West 22nd Street. This is a free event. No reservations. Space is limited; first-come, first-seated.

Beyond Dan Graham: Beyond, part of the "My Turn" series
Thursday, October 1 at 7 pm
Scholars, critics, and artists join Dan Graham for a roundtable conversation about his inimitable contributions to performance, music, and architecture.
Admission is $8; $6 for senior citizens and students; free for Whitney members. Tickets available at whitney.org.

WhitneyKids Punk Rock!
Saturday, July 11 from 1 to 4 pm
Families are invited to explore the interactive sculptures of artist Dan Graham through his sources of inspiration--from punk rock to cartoons. Enjoy a performance of Rock and Roll Ice Cream by Japanther, innovative punk band and collaborators with Graham, as well as animated film screenings and gallery activities. For families with kids ages 6-12. All children must be accompanied by an adult.
Admission is $10 per family (free for Whitney member families). A family ticket is valid for up to 2 adults; children under 12 always receive free admission. $5 admission for additional adults. Purchase tickets in advance online at whitney.org/family. Tickets will also be available the day of the event.

The Whitney Museum is located at 945 Madison Avenue, New York City. Museum hours are: Wednesday, Thursday, Saturday, and Sunday from 11 a.m. to 6 p.m., Friday from 1 p.m. to 9 p.m., closed Monday and Tuesday. Admission is $15 for adults; free for members, children (ages 11 and under), and New York City public high school students. Senior citizens (62 and over) and students with valid ID: $10. There is a $6 admission fee for a pass to the Kaufman Astoria Studios Film & Video Gallery only. Admission is pay-what-you-wish on Fridays, 6-9 pm. For information, please call 212-570-3600 or visit whitney.org