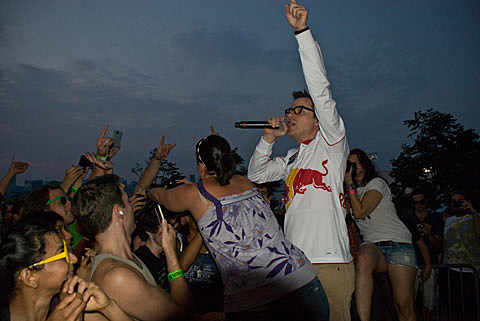 Weezer have recently gone indie again, in the literal sense at least, by signing to Epitaph Records for the release of their eighth full length album Hurley. "I've been a fan of Weezer from the beginning, and I've loved all their records, so it's amazing to find myself working with them on the new one!" says Brett Gurewitz, president and founder of Epitaph Records and also guitarist and songwriter in Bad Religion (who have upcoming tour dates!).

The album comes out September 14th (and features Jorge Garcia, the actor who played Hurley from 'Lost', on the cover) and is available for preorder now. An MP3 of the song "Memories" is available above, and a video of lead vocalist and guitarist Rivers Cuomo talking about the album is below.

In addition to going 'indie', Weezer has also increased their 'cred' by announcing ideas for a possible Blue Album/Pinkerton tour. "We have this really exciting idea to do a tour where we spend two nights in each city, and the first night, we play the entire Blue album, and the second night, we play the entirety of Pinkerton. We're just running it by promoters right now to see if there's sufficient interest in the markets to do something like that, and if they're on board, it's gonna happen," says Rivers Cuomo in an exclusive with MTV News. There are no official dates for the tour right now, which is still just an idea, but according to Cuomo, "the fan response has been incredible so far for the idea, and, if they want to, they can contact their local promoter and tell them to make it happen."

Weezer does also have a few current tour dates listed below and a fall tour is soon to be announced. Also, tonight (8/20), Park Slope's Bar 4 is hosting The LC Tribute to Weezer: The Blue Album Vs Pinkerton. The show will feature various solo acts covering The Blue Album and a full band covering Pinkerton in its entirety (though no specific lineup seems to be announced).

dates and videos below..