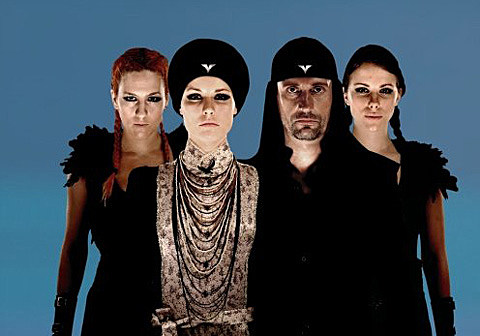 Slovenian industrial legends Laibach have been at it for over 30 years and will release Spectre -- their first new album since 2006 -- on March 4 via their longtime home of Mute. It once again finds them reinventing themselves, though the barked/growled vocals of Milan Fras remain a distinctive constant. From the press release:

With SPECTRE Laibach has created a big, important, and almost dangerous step forward; it seems that this time it has fatally crossed the Rubicon. On this album the group - which has never defined itself politically, but has, nevertheless, constantly analysed politics through its work - comes across as politically engaged as never before. SPECTRE literally sounds like a political manifesto manifest in poetic form. Titles and lyrics couldn't be more direct. With these lyrics and songs, Laibach, who has always given a controversial impression - or an impression of controversy - especially in terms of its political orientation, is now very clearly taking a position on the political spectrum and probably irreversibly abolishing its own (to some extent quite comfortable) political 'freedom' and neutrality.

The first released track from Spectre is "Resistance is Futile," and while it begins like sleek dancepop, it quickly becomes much more Laibachian. Stream that and check out a video trailer for the album below.

Laibach will be touring in 2014 -- no North American dates have surfaced but all European dates are listed below...