"Infest shredded tonight - the Acheron crowd went ballistic and it was a steam bath - it ruled." - Matthew Melnick

Infest at The Wick (via Terry Hope Romero) 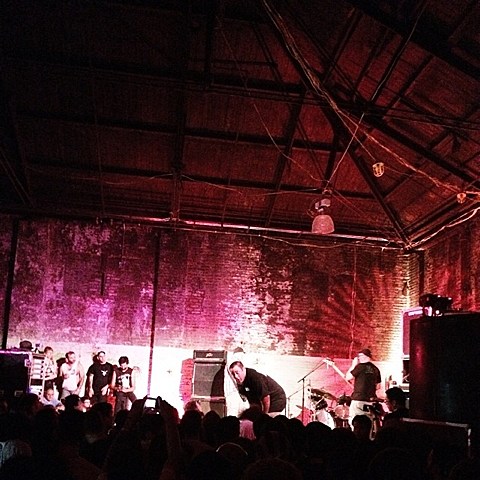 The legendary Infest had a highly influential run in the '80s and '90s where they helped pioneer what eventually became known as powerviolence. The band first reunited in 2013 for a few one-offs including one in LA, another in Miami, Maryland Deathfest and Chaos In Tejas. This year, they played A389's 10th Anniversary, Damaged City, and over the weekend came to NYC for their first two shows here ever.

The band hit Acheron on Friday (6/27) with Magrudergrind, Hounds of Hate and Chain Rank, and The Wick on Saturday (6/28) with Paint It Black, Replica and Ajax. You can watch full set videos of their sets from both shows, along with their 31-song setlist and a video of Paint It Black's set, below...

INFEST SETLIST: (via)
Sick-O
Break the Chain
Pickled
Mankind
Judge Me
Shackled Down
Voice Your Opinion
Cold Inside
Feeling Mean
Sick Machine
Once Lost
Sick and Tired
Terminal Nation
In His Name
Nothing's Changed
Mindless
Which Side
Excess Pig
The World Is Dead
Speak Easy
Them
Behind This Tongue
Sickman
What's Your Claim
True Violence
Dirty Dope Dealer
Plastic
Where's The Unity
The Game
Kill the Peace
My World... My Way