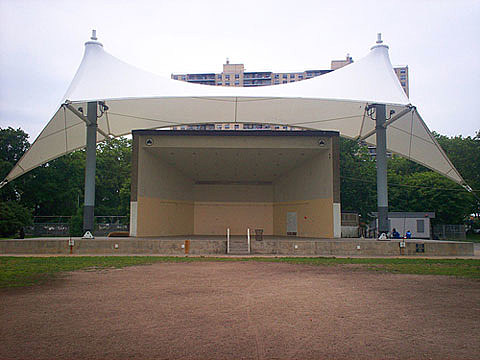 The initial/partial schedule for the 2010 Seaside Summer Concert Series at Asser-Levy Park in Coney Island is posted below. The series of free shows kicks off on July 15th with Neil Sedaka and Brenda Lee. After that, there's a July 22nd show with the "Beach Boys" (Mike Love/Bruce Johnston) and Happy Together Tour (Flo & Eddie of the Turtles, Mickey Dolenz of The Monkees, & others), a July 29th show with George Thorogood and the Destroyers and Southside Johnny and the Asbury Jukes, and date-TBA shows with Belinda Carlisle (whose GoGos tour was recently canceled) and secret guest (the B-52s?), John Legend (who plays Brooklyn Bowl tonight) and Aretha Franklin, plus Latin Night. (schedule via Sheapsheadbites).

The Seaside concerts happen Thursdays at 7:30pm at Asser Levy/Seaside Park (West 5th Street and Surf Avenue) in Coney Island/Brighton Beach, across the street from the New York Aquarium. For now they still happen in the above-pictured bandshell, though things may get fancier in the future.

There's also the associated 28th Annual Martin Luther King Jr. Concert Series, which happens Mondays at Wingate Field (located on Brooklyn Avenue between Rutland Road and Winthrop Street opposite Kings County Hospital). That kicks off with George Clinton & Parliament Funkadelic and The Ohio Players on July 12th. Acts for the other nights of the series are TBA. Dates are below.

The full lineup (with most of the schedule) is posted below...

July 15
NEIL SEDAKA
Neil Sedaka is the returning act, after playing the event several times. The Brighton Beach native and Lincoln High School alum is best known for hits like "Breaking Up Is Hard To Do" and "Happy Birthday Sweet Sixteen."

BRENDA LEE
Brenda Lee is a rockabilly, pop and country music performer most well-known for her songs "Rockin' Around The Christmas Tree" and "I'm Sorry." It's Lee's first time at the event.

THE HAPPY TOGETHER TOUR
The Happy Together Tour showcases The Turtles (featuring Flo & Eddie), Mickey Dolenz (of The Monkees), The Grassroots (featuring Rob Grill), Mark Lindsey of Paul Revere and the Raiders, and The Buckinghams

--
July 29
GEORGE THOROGOOD AND THE DESTROYERS
Thorogood is a blues rock performer known for his hit song "Bad to the Bone" as well as for covers of blues standards such as Hank Williams' "Move It On Over" and John Lee Hooker's "House Rent Boogie/One Bourbon, One Scotch, One Beer".

SOUTHSIDE JOHNNY AND THE ASBURY JUKES
Southside Johnny and the Asbury Jukes is considered the Grandfather of "the New Jersey Sound." Jon Bon Jovi has acknowledged Southside as his reason for singing, and their notable songs include "I Don't Want To Go Home" and "The Fever."

--
DATE TBA
BELINDA CARLISLE
Belinda Carlisle is best known for her work as the lead vocalist of The Go-Go's, the first Billboard chart-topping all-female band to write their own music and play their own instruments. The Go-Gos helped usher in New Wave music with songs like "We Got The Beat". Since the band's 1985 breakup, Carlisle continues to have a very successful solo career, garnering Gold and Platinum albums.

[EMBARGOED] - Markowitz asked us not to name this band because it might impact sales of another NYC tour date.
The other band that we can't mention is also a New Wave pioneer, and recently dropped an apostrophe from its name.

--
DATE TBA
JOHN LEGEND
John Legend is a contemporary R&B singer best known for hits including "Ordinary People" and "Used to Love U". He's also collaborated with numerous mega-stars such as Alicia Keys, Andre 3000 (OutKast), Jay-Z and Kanye West. His forthcoming album, Wake Up Sessions, is being produced by The Roots and is expected to be released in September.

---
DATE TBA
ARETHA FRANKLIN
Eighteen-time Grammy Award recipient Aretha Franklin is a soul icon, with unforgettable hits like "Respect" and "I Knew You Were Waiting (For Me)". Franklin is the first female artist to be inducted in the Rock and Roll Hall of Fame, and was also the only featured singer at the 2009 presidential inauguration for Barack Obama.

Seaside Summer Concert Series performances are held Thursday nights at 7:30 pm at Asser Levy/Seaside Park at West 5th Street and Surf Avenue in Coney Island/Brighton Beach, across the street from the New York Aquarium.
The public is encouraged to bring their own chairs. A limited number of rental chairs in a specially designated area are available on a first-come first-served basis.

Martin Luther King Jr. Concert Series performances are held Monday nights at 7:30 pm at Wingate Field, which is located on Brooklyn Avenue between Rutland Road and Winthrop Street opposite Kings County Hospital. Possible rain date on Tuesday night.
The public is encouraged to bring their own chairs because seating is limited.