Today Is The Day at Highline Ballroom (more by BBG) 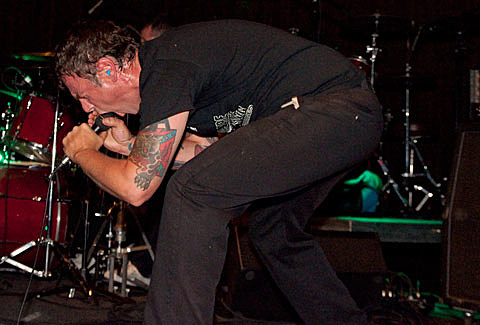 And so it has begun. After a fun Maryland Deathfest 2011 (pictures of day 1, 2, 3, 4), the festival has announced confirmations for MDF 2012 including some amazing names (Bethlehem, Demigod, Ghoul, Church of Misery, The Devil's Blood, Dragged Into Sunlight, Ulcerate, others) and even a true a headscratcher (Anvil?). Full lineup thus far is below. Maryland Deathfest X kicks off on May 24th, 2012 at Sonar. No tickets yet

In related news, Today is The Day, whose rhythm section once was home to half of Mastodon and now features members of Wetnurse (Curran & Ryan), have completed their new LP Pain Is A Warning and are preparing its release for August 16 on Black Market Activites/Good Fight. Preorder it now, and check out the lead track "Expectations Exceed Reality" streaming below.

All MDF additions, that new Today is The Day, and some video is below.

Today is The Day - Temple of the Morning Star

Today Is The Day - In The Eyes Of God

The first 20 bands have been confirmed for MDF X: