Inquisition at Saint Vitus in 2012 (more by Greg Cristman) 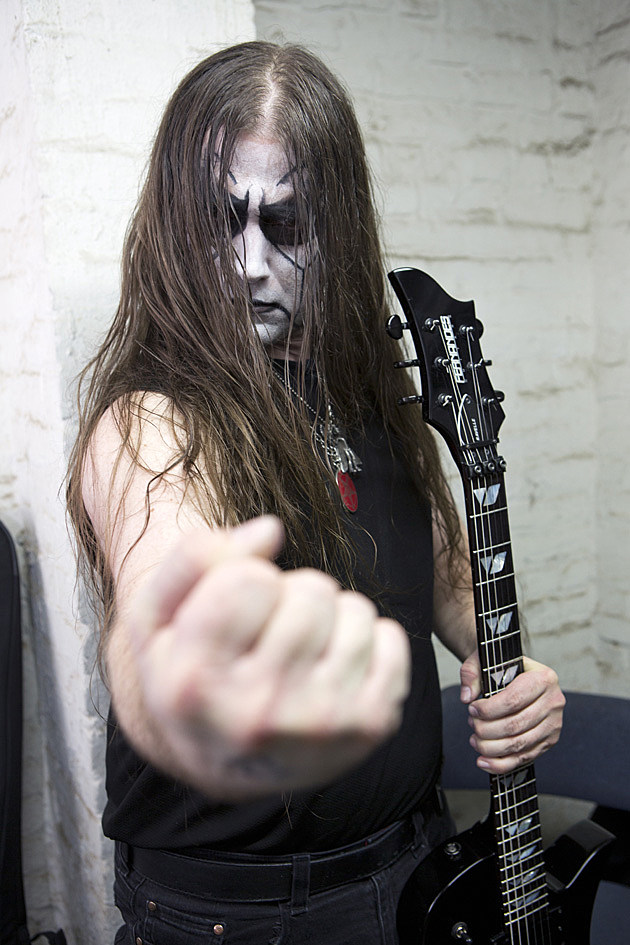 If you're not familiar with them, Inquisition have a confusing bio. They're an American black metal band from Colombia -- their guitarist and vocalist, Dagon (after the Lovecraft story, presumably), was born in the States but formed the band in Colombia before moving it back here.

Their new album, Obscure Verses for the Multiverse (so wacky!), is one of the catchiest metal albums of the year. We interviewed Dagon about the album over at Invisible Oranges. In true black metal tradition, Dagon is a pretty esoteric dude, and his answers got pretty...well...obscure at times. Here's a sample:

Inquisition's lyrical content has shifted from more traditional occult themes to a more esoteric, cosmic focus. What brought this shift about? What, exactly, are Obscure Verses for the Multiverse?

I was interested in going in a direction of a realistic occult approach, basing this direction on what surrounds us -- the universe -- and bringing its occult elements to the eye.

The title basically means "obscure laws for the multiple universes," the laws being the laws of quantum mechanics, which were made by the gods -- the same gods that came here and created us. The gears are on a microscopic level that dictate how everything works around us, everywhere on this plane and other planes or universes, which at least in theory exist and have been spoken about so much by many spiritual mysticisms.

The element of Satan as the force of opposition is hailed here by declaring alien forces as our creators, who have conquered all levels of dimensional travel and hold the verses of the secrets to our existence. We are here for a reason, but it is a reason to be explored by travelling within our own astral plane, the conscious. Once this is conquered, we can open our third eye to enter other planes that are here for us to witness after death: the other dimensions or universes. As multiple consciousnesses are developed in the mind, new heights are obtained just as multiple universes collide in space, creating a new universe after leaving a black hole. This creation of a new universe leads to a cycle in both mind and space.

In essence, the human mind is a dimension, one of many, as real as the dimension of space and the dimensions we have yet to witness after our death. The human consciousness cycles with space; it is the same, and because it is the same, we are cosmic dust evolved into the highest form possible thanks to the gods who came here. I am not really influenced by any writers. I am quite inspired by Poe, Lovecraft, and so forth, yes, but my writings are from my mind entirely.

Read the whole interview over at Invisible Oranges. It's spooky, as you'd expect.

Speaking of spooky, you should totally celebrate Halloween by listening to Dagon croak about space all over Inquisition's new album, which just came out and which is streaming in full below. The band hasn't announced any tour dates in its support yet, but they were rarely off the road over the past couple of years. A live jaunt is undoubtedly in the offing.

Inquisition - Obscure Verses for the Multiverse