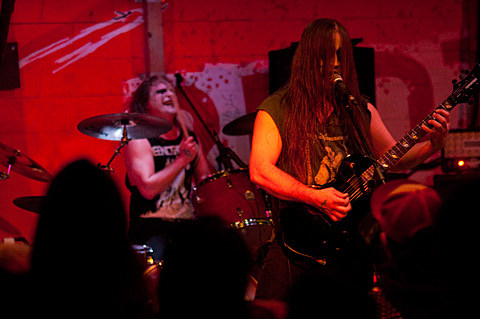 Corpsepainted hordes, Inquisition want you to know that it doesn't take over the top complexity (like Deathspell Omega) or underachieving lo-fi simplicity (like 90% of the current "kvlt" genre) to make a great black metal record in 2010. The duo has done it with their new LP Ominous Doctrines of the Perpetual Mystical Macrocosm, out now exclusively through Hell's Headbangers (official street date is January 18th). The ten-track release is anchored by fantastic songwriting and better riffs, all with crunchy-yet-crystal-clear production; it's maniacally brutal but endlessly listenable, and one of my favorite records of the year. Dig on the song "Command of the Dark Crown" which is available for download above and streaming below. And you can stream the album opener, "Astral Path to Supreme Majesties", at Hell's Headbangers.

Hell's Headbangers is also offering the band's "diehard version" of Into The Infernal Regions Of The Ancient Cult on colored gatefold 2xLP, as well as the CD version. Pick those up. The vinyl in particular is impressive.

Inquisition's 1990 Anxious Death Mini-LP and their 1993 demo Forever Under has been combined to receive a repress and for a 2LP repress treatment courtesy of Nuclear War Now. Jump on the Diehard version (comes in different colors) or the regular vinyl now.

Inquisition, whose stage show was punishing at Red 7, have limited live action scheduled in the coming months but are on board to play Maryland Death Fest 2011 along with an obscenely large cast of hooligans. Tickets are on sale.

Full tour dates, the song stream and some video is below.

Inquisition - "Command of the Dark Crown"