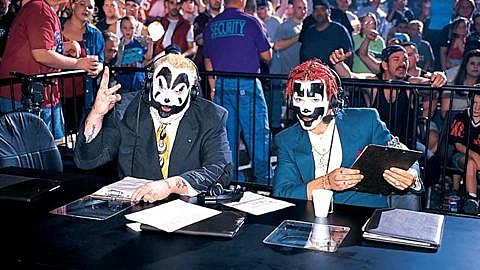 One should never be surprised by anything involving Insane Clown Posse yet here's this: ICP are being sued by their former publicist and attorney, Andrea Pellegrini, who alleges wrongful termination and harassment, retaliation and infliction of emotional distress while an employee of ICP's Pyschopathic Records. In a lawsuit filed in Michigan, Pellegrini, who worked at Psycopathic Records for three years, describes a hostile work environment with rampant sexual harassment.

From TMZ, here are a few examples of the alleged abuse, which, according to Pellegrini, began in 2009:

--Later that day .... Andrea says Dan gifted two other women in the office with "vagina tighteners"

-- In August 2012 ... she was told she couldn't use the private bathrooms at the Gathering of the Juggalos and was forced to share restrooms that were "often full with naked male strangers."

It was about this time last year that the Insane Clown Posse sued the FBI when "Juggalos were unjustly called a gang in its 2011 National Gang Threat Assessment." Read more about Pellegrini's allegations, which include being asked to obtain illegal automatic firearms for a photo shoot, at TMZ.