Peggy of TPOBPAH at Siren Fest (more by Dominick Mastrangelo) 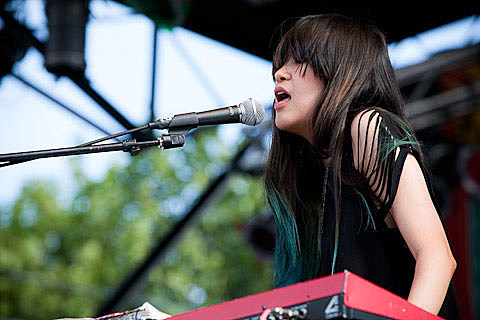 Online store Insound will open a pop-up design store from 10/8 - 10/10, situated at 201 Mulberry Street in NYC. In addition to silk-screened concert posters, tees, turntables, and LPs for sale, the store will also feature appearances from live DJs every night as well as some free beverages. Look for Nick Zinner on 10/8 (who is taking time out from his busy surprise show schedule), Kip and Peggy from The Pains of Being Pure at Heart on 10/9 (who play the Official BrooklynVegan CMJ Showcase on 10/21 at MHOW - tickets), and Fred Armisen on 10/10 to all make appearances at the store.

Meanwhile on 10/8 you can expect a DJ night of another sort after Swans play the sold-out Brooklyn Masonic Temple with Baby Dee and Ben Frost. Tickets are on sale for the official Swans after-party on the lower level of BMT at 11PM featuring appearances from DJs Sasha Grey, Caleb (Sacred Bones), and DJ JonBenet (Prurient, Cold Cave).