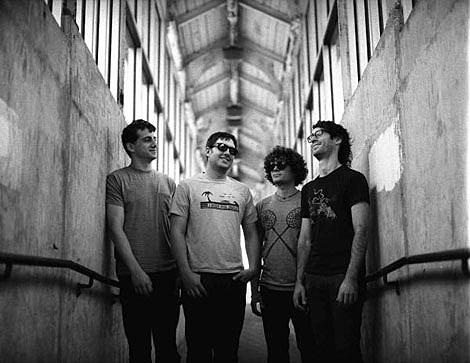 It's hard to believe online indie record store Insound has been around for ten years. Actually it's just hard to believe 1999 was a decade ago, but the calendar says it's so. Insound is also based out of NYC, so we're lucky enough to be invited to their 10 year birthday party tonight (8/27) at Brooklyn Bowl featuring a hard-to-pass-up line-up of local talent: Cymbals Eat Guitars, These Are Powers, The Drums, Real Estate and at least one band yet-to-be-announced (sort of). $10 gets you in the door and there's free Brooklyn Brewery beer from 6 - 9. 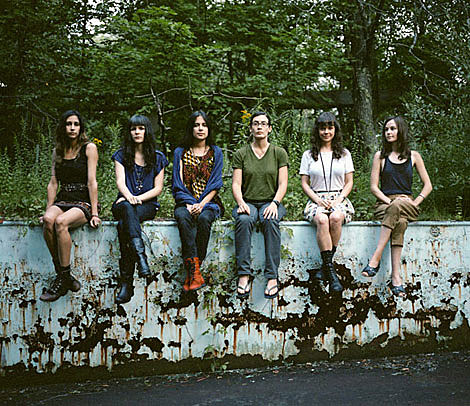 Another very good option in Williamsburg tonight (8/27) is happening at Glasslands, featuring Effi Briest, Mahogany, and Free Blood (but not Deradoorian). The all-girl Effi Briest are in the same spooky, rhythm-heavy realm as the Life Without Buildings or the Slits (and maybe just a little Siouxsie). They've got a split 7" with Telepathe that's out now and they're working on their debut album as we speak. Mahogany, whose new line-up now (nine-strong according to their Myspace) seems to have been nailed down with the addition of former Dirty on Purpose bassist DJ Boudreau, will hopefully be playing some new material as it's been three years since their fantastic Connectivity. Free Blood bring a surprising amount of heat for such a minimal sound, thanks to the chemistry between ex-!!! John Pugh and Madeline Davy. And rounding out the bill are (The) Tony Castles who share a member with Boogie Boarder and are about to hit the studio with Jake Aron (Chairlift, Yeasayer, Acrylics). 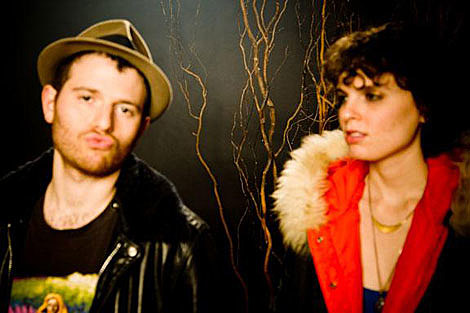 This weekend is the After the Jump Festival which happens Friday - Sunday at Gowanus art space/venue Littlefield. ATJ is a group of bloggers that puts on events throughout the year, but this is the third year for their multi-day event and every night is pretty solid featuring some of the best new bands in NYC and a few from out of town. The full schedule and flyer is at the bottom of the post but I'll highlight a few from each night.

Friday (8/28): I have yet to see sound-collage dance act Javelin but I do like their records and am curious to see how they pull it off live. It's also their last show possibly November, so get in while you can. You can also catchy buzzy Florida band Holiday Shores (more on them below), indie pop royals My Teenage Stride, and the beachy Dinosaur Feathers.

Saturday (8/29): Philly's Free Energy (not to be confused with Free Blood) are a lot of fun if you have no problem with early '80s stadium rock or silly outfits. Despite a feeling I should know better, their live show and giant hooks won me over. Also: the Tom Waits-meets-garage-rock of Wild Yaks and the clattering, poppy Drink Up Buttercup. The night ends as a dance party with just-added Ninjasonik and the wacky Das Racist.

Sunday (8/30): Two of my favorite new NYC bands are playing on the early side. I've written a little bit about Acrylics before, but I've caught them three times over the summer and have been more impressed each time. "Molly's Vertigo," which you can download at the top of this post gives you a good idea of their sound, which is sort of '80s-ish with a dusty Southwest vibe, which maybe makes them a bit like the Rosebuds or Mirage-era Fleetwood Mac. Vocalists Molly Shea and Jason Klauber nail the harmonies and they've got an excellent pedal steel player. They're on at 8PM, don't miss them. Right before Acrylics are Hospitality, who I've written about before, are very charming live and don't play often enough. I haven't managed to catch them since May and am hoping for lots of new songs Sunday.

You can still buy discounted $25 passes for the whole shebang until Friday (8/28) morning. Individual tickets are $10 are night. There's also free beer each night from 6 - 7PM. Again, the whole After the Jump Fest schedule is below. 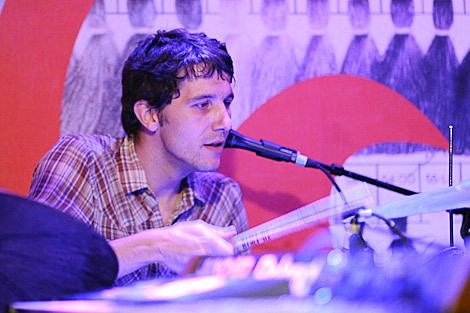 More weekend recommendations. Fellow Brooklyn blogger Chocolate Bobka has put together a solid show at Cameo on Saturday night, with four bands that genuinely compliment each other. My previously-mentioned qualms with their vocals aside, Beach Fossils are hard to dislike and a lot of fun live. I've also been listening to the Holiday Shores (who also play the ATJ Fest the night before) dreamy, melodic debut, Columbus'd The Whim, a lot recently. It's a nice end-of-summer record. Connecticut's Sore Eros are pals with Kurt Vile and Gary War; and Washington DC's Family Portrait are part of the Underwater Peoples scene... Real Estate comparisons aren't entirely inappropriate and you can check out their song "Mega Secret" at the top of this post.

And also Saturday, there's an early show (7PM) at Glasslands featuring Phantogram, a duo who, for lack of a better term, are kind of trip-hoppy but in a '00s sort of way (breakbeats but no John Barry or Morricone samples). Chilled, atmospheric, but still danceable. Their debut album, Eyelid Movies, is a pretty good listen. Also playing are Savoir Adore who I've probably written about enough lately, and Darwin Deez.

Full After the Jump Fest schedule, some Flyers and music videos below... 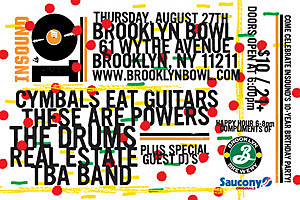 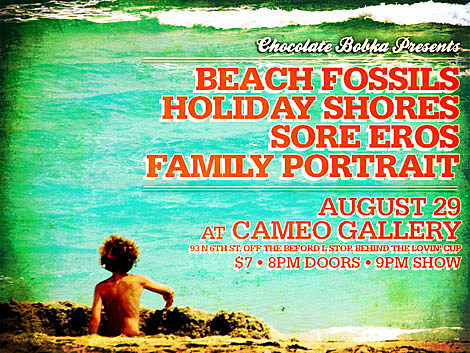 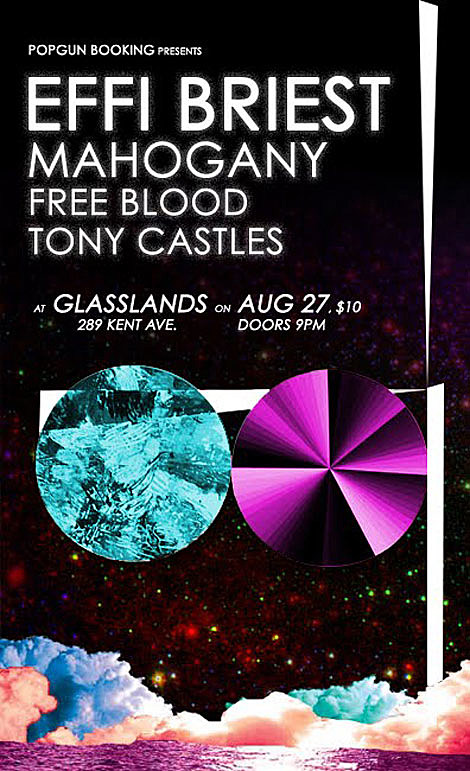 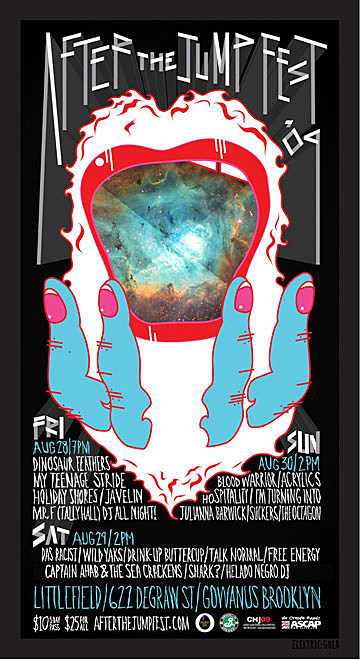 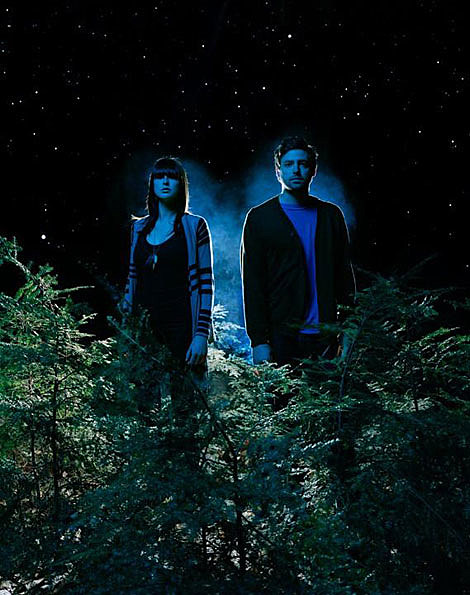 Phantogram - Runnin' from the Cops