Surfer Blood recording the above track (more by Diana Wong) 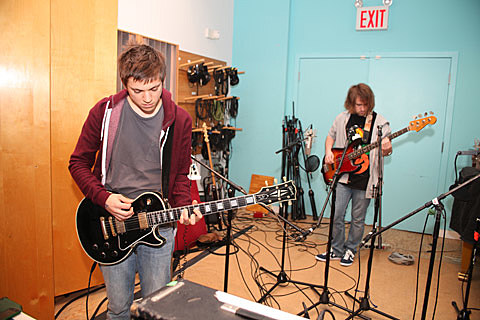 "On October 21st, 2010, Insound & Maker's Mark hosted an artist lounge & recording session at Stratosphere Sound in New York City, the likes of which has never been done before. Grammy winning engineer Geoff Sanoff (Nada Surf, Secret Machines, A Camp) took on the insane task of recording eight of indie music's most talked about new bands in eight hours, and the results are nothing but stellar." [Insound]

You'll be able to pick up those recorded tracks at Insound on 11/9, but first get a sneak preview of one of the three Surfer Blood tracks they're releasing, as a free download above,

And speaking of Surfer Blood, they've been added to Bruise Cruise...

Bruise Cruise is a rock 'n' roll music festival aboard the Carnival Imagination, sailing from Miami to Nassau, Bahamas and back February 25-28, 2011. Tickets are on sale now for this exclusive and all-inclusive Caribbean getaway.

Bruise Cruise is pleased to announce West Palm Beach's SURFER BLOOD on the festival line-up. Their "floating vibes" are a welcome addition to the Bruise Cruise party barge as it sails from Miami to the Bahamas over the course of 3 days filled with sun, rock'n'roll and relaxation. SURFER BLOOD recently completed a US tour with The Drums and are preparing for an upcoming European tour with Interpol.

Just a reminder that Bruise Cruise is also excited to announce the launch of Bruise Cruise Records. BCR will be releasing a series of limited edition vinyl. Each performing artist will be featured on one side of a 7" vinyl release over the next few months. The first record will be distributed in the first week of November featuring un-released songs from Ty Segall and Thee Oh Sees. The 7"s will feature artwork by Rob Corradetti [www.radrox.com].

Every Bruiser will receive at least one complimentary record. As the sailing date nears, Bruise Cruise will be gifting the entire box set through a variety of contests that will be announced on our site.
In the midst of attendees' three days at sea, Bruisers will have the pleasure of soaking up the sun experiencing 24 hours in the Bahamas. Bruise Cruise will be announcing a series of events that will occur in Nassau, including the big island party concert at Señor Frog's, which will feature select Bruise Cruise artists and conclude with New York Night Train's Soul Clap and Dance-Off. 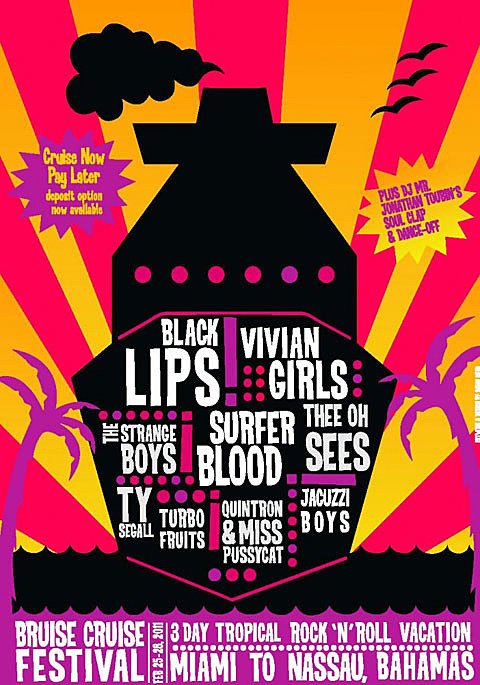