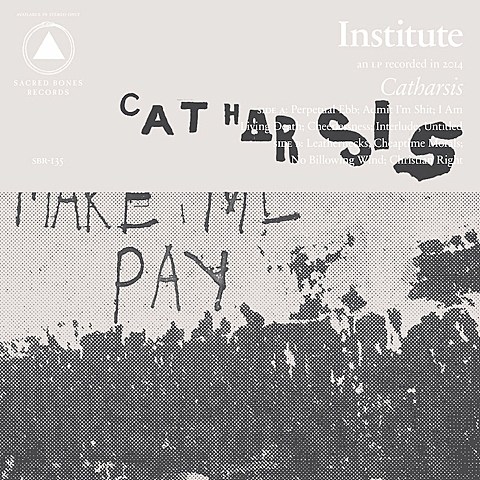 Austin's Institute (who share members with Wiccans and Glue) already have a few EPs out, and they're planning on releasing their debut album, Catharsis, on June 9 via Sacred Bones. The album's closing track "Christian Right" features a contribution from Parquet Courts' Andrew Savage (also previously of Wiccans), and PC's garagey tendencies can also be heard on the album's first single "Perpetual Ebb," which makes a bit of a departure from Institute's post-punk stuff. Stream that, with the LP tracklist, below. Artwork above.

Institute were in NYC last week for New York's Alright, and they'll return when they tour again this June. The new dates have them at Brooklyn's Palisades on June 14 with local post-punks Anasazi (who played with them at NY's Alright), Cheena (mem Pharmakon, Hank Wood & the Hammerheads, etc) and Mommy. Ticket info TBA.

All dates, with the new song and some music from Anasazi and Cheena, below...