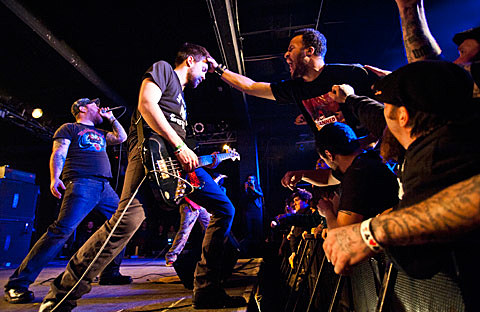 Integrity have scheduled a three-date, mostly East Coast jaunt that will include a stop in Connecticut, Boston and Cleveland. Look for Dwid and co to take on The El N Gee in New London, CT on October 26 alongside appearances from Ringworm and The IG! Fits. Tickets are on sale. Integrity is also scheduled to appear at the now-sold-out A389 Anniversary in January.

In other early Victory Records band news (sorry if that sounds like a dirty word), Strife have reunited and will play a pair of shows outside of NYC, including stops at The El N Gee on 11/30 with Supertouch, Death Before Dishonor and more, as well as 12/1 in Philadelphia at The Barbary with Down To Nothing, Mother of Mercy, Suburban Scum, Dead End Path and more. The shows are in celebration of Strife's Witness a Rebirth, the band's new LP due on 6131 Records.

All Integrity dates and video of their full set at the same venue last year is below.