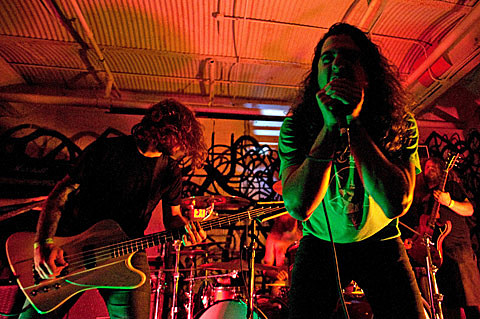 Richmond, VA psych metallers Inter Arma are set to follow last year's excellent Sky Burial LP with the one-song, 40-minute EP The Cavern on October 14 via Relapse. The trailer is out now, and features a few clips of the song including one with guest vocals from Dorthia Cottrell of fellow Richmond band Windhand (whose tour just hit NYC over the weekend). Watch/listen below.

Inter Arma are on board for the 2015 edition of Maryland Deathfest, and the only other date they have announced so far is the Metal Injection/MetalSucks CMJ showcase happening at Bushwick's Acheron on October 21 with King Parrot, So Hideous, Lazer/Wulf and Moon Tooth. Tickets for that show are on sale now. No word yet if other CMJ shows will be added.

UPDATE: Other dates were announced including a European tour with Mantar (who we highlighted in our Fest preview). All are listed, with The Cavern trailer, below...