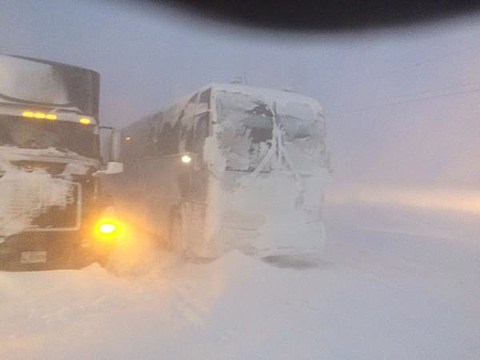 Interpol and Hundred Waters are on tour together, though they actually haven't played since their Columbus, OH show on Monday (11/17) because they've been trapped inside their snowed-in bus outside of Buffalo since around 4 AM Tuesday morning. Last night's Toronto show was cancelled, as the band posted on their website:

Our bus is trapped in a snowstorm just outside of Buffalo. We haven't moved our position on the road in over nine hours. Unfortunately, we'll have to cancel tonight's concert at the Kool Haus. We were greatly looking forward to the show but the big bad winter has come early this year. We will be informing people of a new date as soon as we can.

And now Thursday's Montreal show is cancelled too...

It's with great regret that we have to announce the cancellation of our show tomorrow night in Montreal. We've been stranded in a snowstorm outside of Buffalo for over 40 hours and still don't know when we'll be able to move from our current position. We're disappointed that we won't be able to visit as scheduled but we'll make it up to you, Toronto and Montreal. We love you guys. We were really looking forward to the shows.

As of this post, they're still stuck around 9 PM on 11/19, over 40 hours since they were able to move. As Stereogum points out, guitarist Daniel Kessler and touring member Brandon Curtis have been live tweeting the whole thing...

Hundred Waters posted a few themselves...

Hundred Waters were also supposed to appear on 'Letterman' tonight but that's been cancelled too, and rescheduled for February. They also just announced a 2015 tour.