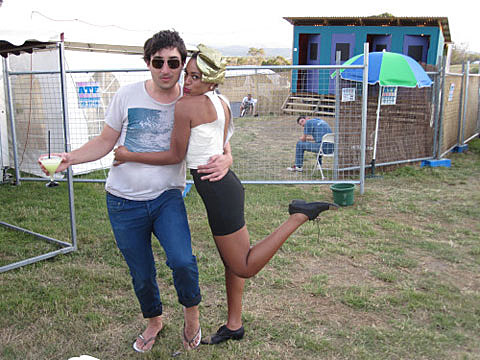 Her recent credits include playing with Dirty Projectors at Fashion Week and singing with Of Montreal at Highline and Terminal 5. Now Solange is DJing at Brooklyn Bowl on Friday, June 18th. I'm not totally sure if she's a good DJ or not, but tickets are on sale.

That's her in the picture above with her friend Ed Droste from Grizzly Bear who maybe she'll be checking out Sunday at Williamsburg Waterfront (again).

Grizzly Bear also have a NYC show coming up later in the summer at Governors Island with the Walkmen (tickets are still on sale). The Walkmen have just announced a new album! Pitchfork reports:

"Yesterday, we reported that Interpol's new album comes out September 14. As it turns out, September 14 will be a big day for bruised, world-weary New York indie rock, since that's also the date that Fat Possum will release Lisbon, the new album from the Walkmen.

The band recorded the follow-up to 2008's You & Me over two years, working in warehouses in Brooklyn and Philadelphia. They also wrote a few songs on trips to the Portuguese city that gave the album its title. St. Vincent/Mountain Goats/Thermals knob-twiddler John Congleton produced the 11-song album, and Passion Pit/Les Savy Fav veteran Chris Zane engineered it."

As Pitchfork said right there, Interpol's new album is coming soon too, and their old label Matador will be releasing it in the US! In the UK it will be Interpol's "own newly formed label, Soft Limit" that puts it out on September 13th (one day before the US). More details below. Interpol, now with a new 5-person lineup, are playing a free NYC show on June 26th.

Back to Solange for s second... She blogs that that she is in the process of finishing her new, indie (as in not on her former label, Interscope) album with indie rocker Dev from Lightspeed Champion (something that was originally reported a while back). That update is below... MY CALIFORNIA MISSION FIRST STARTED FROM DECIDING TO RECORD MY ALBUM IN SANTA BARBARA. (OF COURSE NAMES AFTER THE HISTORY OF THE "MISSIONS" STARTED THERE) BUT AFTER WEEKS OF COMPLETE ISOLATION AND LOTS OF FREAKY SOUNDS AT NIGHT ON A 5 ACRE "PARADISE", I DECIDED TO PACK UP AND FINISH MY ALBUM IN A FEW DIFFERENT PLACES IN CALIFORNIA. THESE ARE PICS TAKEN FROM THE HOUSE IM COMPLETING THE ALBUM IN. ME AND DEV ARE PRETTY MUCH FINISHING THE TOUCHES ON THE WRITING SIDE AND IM RECORDING THE FINAL VOCALS. THIS HOUSE IS AMAZING, COMPLETELY INSPIRING AND LITERALLY ON TOP OF THE WORD (OR AT LEAST LOS ANGELES). AFTER FINALLY FIGURING OUT HOW TO COMPLETELY CAPTURE MY SOUND (THIS ACTUALLY TOOK ME FIGURING OUT I SOUND BETTER ON A 250 BUCK LIVE MIC AND DITCHING THE $7000 "TOP OF THE LINE" SHIT) I AM ON A ROLL AND LOOKING FORWARD TO FINISHING UP SOON. [Solange, June 15, 2010]

Interpol will release their fourth, self-titled, studio record on September 13th through their own newly formed label, Soft Limit. The New York-based band announced the news of the album to fans on their website last week.

The album was recorded at Electric Lady Studios, New York, produced by Interpol, and mixed with Alan Moulder at Assault and Battery, London. The band will be touring in North America this summer and in the UK and Europe later in the year.

For the release of this record, the band are going back to their independent roots by releasing the album on their own, newly formed label, Soft Limit, licensed to Cooperative Music throughout the world - excluding North and South America.

The following was posted on their website last week :

"The month of September; summer ends, classes begin. The coming of a new season is in the air as autumn approaches. A time of year when the natural world slips into a slumber, and Interpol releases it's fourth studio recording. The self titled, self produced, long-player will be available world wide in mid September. We can't wait to share our new effort with all of you. We've just announced some shows and we look forward to see you soon in your neck of the woods."