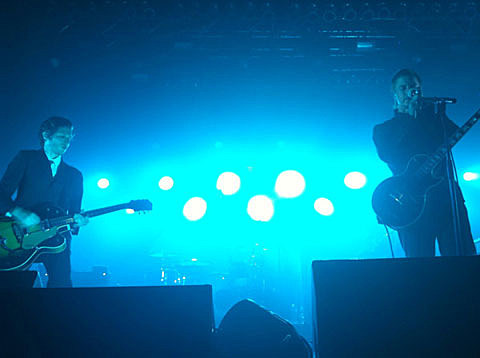 In a time where the genre is thriving, dream pop vets Blonde Redhead reminded the audience at Terminal 5 last night (5/8) that they're still on top of their game. Performing with a fervor unlike many of their contemporaries, Blonde Redhead delivered a tremendous set comprised of songs off their two most recent albums, 23 and Penny Sparkle. Kazu Makino and Amedeo Pace fed off each other's energies with ease, while sincerely retaining a youthful spirit of intensity. Pace's twin brother Simone completed the sound perfectly with a style that refuses to choose between precision and attack.

Having always considered Blonde Redhead's more recent material to be on the more relaxed side, they successfully proved me wrong with one of the loudest sets I've ever seen. They translated the subtle trip hop rhythms of "Here Sometimes" into dark bass-heavy dance beats that filled the entire venue with the same power the band was generating on stage. Standout track "Spring and by Summer Fall" ended with a blaring noise section and a light show spastic enough to blind the crowd, further accentuating what may have already been the most memorable part of the set.

A half hour later, Interpol emerged out of the shadowy lighting and fog machines and dove into Interpol album opener "Success." They followed the song with an hour and a half of material off all four of their albums, "Say Hello to the Angels" was an especially pleasant surprise early on. The band performed with a level of confidence that has evidently grown from album to album, and each member's distinct playing style cut through. Not being able to see Carlos D (or even Dave Pajo) was extremely unfortunate, but his trademark bass lines were well replicated by Interpol's current touring bassist Brad Truax. The highlight of the set came when Truax broke into the opening bass line of "Evil," which was responded to with excessive applause from the crowd who proceeded to shout along to every word in the song.

The NYC show was a benefit for Sickday Safety Net. Interpol is done touring for now, but has more dates scheduled all over the place throughout the summer. Their setlist from last night and a couple videos from the show, below...

Encore:
The Lighthouse
Specialist
Obstacle 1
Not Even Jail