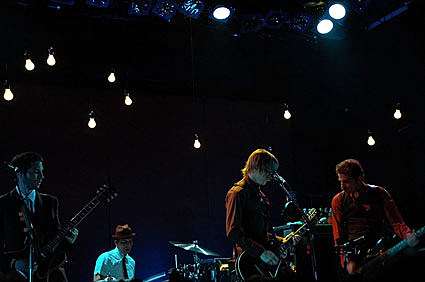 Interpol's next NYC show will be significantly bigger than their last one. It's at Madison Square Garden on September 14th - the big room - the one White Stripes & Muse are playing - the one Moz never made it to. The show is being promoted by "Bowery Presents". Will Interpol pull it off? Will you be there?

Stream the new Interpol album Our Love to Admire at MTV.com - it comes out for-real on July 10th. Hang out with Interpol and listen to the same album at Sweet & Viscous Bar in NYC on July 11th (free, 9pm-2am). Watch and listen to Interpol perform exclusively for AOL @ Spinner. Check out the video for "Heinrich Maneuver" below. Tour dates below too...