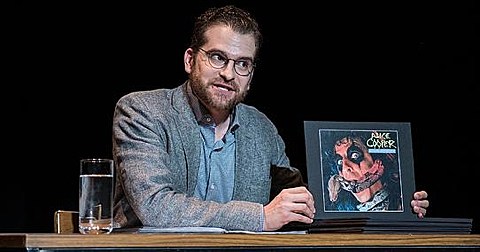 In case you were wondering what ex-Interpol bassist Carlos D is up to these days, Bedford + Bowery caught up with him and found out he just graduated NYU's graduate acting program...

Tell me about what you're up to -- you're pursuing an acting career now, right?

I'm auditioning and looking for an agent. Really, I just graduated. Also, it's not fair for me to even say, "This is what I'm doing." I spent three years in acting boot camp [at NYU's graduate acting program] and I'm a 41-year-old man. I'm no spring chicken. So I'm looking at some of my younger classmates and how they're coming out of the gate with fire under their asses and they're doing a lot of stuff. I'm like, "Wow, that's pretty fucking impressive." I just don't have that ability right now. I'm still putting all of the pieces together.

...How'd you land these two roles in Sherlock Holmes and the Case of the Jersey Lily (a play that recently wrapped at the Dorset Theatre Festival in Vermont)?

I auditioned for it while I was in school. It was a good play to do to not have to worry about digging too deep. It was more of a satire Sherlock Holmes than a straight-up Sherlock Holmes story. It had elements of both. Sherlock Holmes fans were very pleased, but there was also a lot of comedy.

My role was John Smythe, who was the lackey of Professor Moriarty, who is the arch-villain in the Sherlock Holmes saga. That was fun. I had to put on a Cockney accent, which I hadn't worked on. I'd worked on a couple dialects in school, but not Cockney. It was really, really challenging.

The other character was actually a legitimate historical figure-- I didn't know this until I looked it up-- but his name is Abdul Kareem. He was the chief servant to Queen Victoria. He just showed up for a couple of scenes, strictly for plot purposes and I had to don a whole get-up.

Well there you have it. Meanwhile, Interpol recently wrapped up a tour that hit Brooklyn's Prospect Park. Check out pictures.