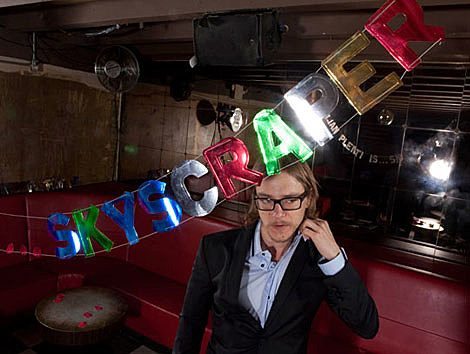 Since we just mentioned one new solo project from a band on hiatus (Julian from The Strokes), it'd be good to mention two other similar albums in the works.

In May, it was announced that Paul Banks of Interpol will be releasing a solo record called Julian Plenti is Skyscraper (Plenti being his own moniker) through Interpol's ex-label Matador on August 4th. Listen to "Fun That We Have," from the record, above.

This'll be the recording debut from "Julian Plenti," but the project itself is nothing new.

From 1998 to 2003, Julian Plenti performed in and around Manhattan as an acoustic solo artist. Venues that played host included Tobacco Road, Pete's Candy Store, The Knitting Factory, The Living Room, and "Lach's Antihoot" at Sidewalk Cafe.

In 2006 Plenti began to demo a selection of his music using Logic Pro, including some older acoustic songs ("Girl on the Sporting News," "On the Esplanade," "Fly as you Might," "Fun that We Have") with added beats and string arrangements.

He hired session performers to play the string and horn arrangements, and also enlisted some friends. Mike Stroud of Ratatat and Charles Burst of The Occasion guest on "Skyscraper;" Sam Fogarino of Interpol plays drums on "Games For Days;" and Striker Manley of Stiff Jesus appears on "No Chance Survival" and "Fun That We Have."

Shows in support of the record are expected (...as are Julian Casblancas shows. I vote they play a show together).

And it was announced this week that another frontman-cum-solo-performer, Alec Ounsworth of Clap Your Hands Say Yeah (who we reported in January will be taking a break... possibly a very long one), will be releasing his debut, Mo Beauty, on October 20th on Anti- Records. That album was recorded at New Orleans' Piety St. recording studio...

Tracklists for Mo Beauty and Skyscraper, with a YouTube video that purports to be the first 30 seconds or so of each Julian Plenti track, below...