Legendary Manchester band A Certain Ratio have shared the opening track from ACR:EPR, the group's final entry in a series of three EPs released this year that will be out August 13 via Mute. Driven by Tony Quigley's fiery lead saxophone, "$ouls in the City (Part 2)" melds skronky no wave with frenetic techno into a propulsive blast of jazzy noir. That it comes before the more chilled out "Part 1" is just how ACR roll. You can watch the video for the song below.

With ACR:EPR almost here, we posed a few questions to the band's Martin Moscrop and Donald Johnson about the EP series -- which include tributes to ACR vocalist Denise Johnson and legendary DJ Andrew Weatherall, both of whom died in 2020 -- their 40+ history, having Madonna make her live debut opening for them in NYC, their upcoming UK tour (dates are below), and more. Read that below.

You can preorder ACR:EPR on exclusive transparent amber vinyl -- limited to 250 copies worldwide -- in the BrooklynVegan shop.

What is it about the EP that appeals to you, and at what point did you decide to do a series of EPs instead of releasing them as an album?

Martin Moscrop: It was our main man at Mute, Paul’s idea. We didn’t stop recording once we had finished ACR Loco, so we needed an output for the ideas we were creating. We really like EPs because they are basically mini albums and it’s easy to get a concept into doing 4 tracks. The 12 songs on the 4 EPs would have made a very strong album but there is less pressure when making EPs which allowed us to be more creative in the writing process. EPs have always been good to us from the Flight EP on Factory in 1980, the Do The Du (Casse) EP on Factory US in 1981, the Four For The Floor on A&M in 1990 and the Soundstation Volume 1 EP on Robs Records in 1997 and now this trio. We are made up with the way they have turned out and each EP is very different.

I know that the tracks from EPA were recorded just after you finished mixing the album -- how much of this EP series was recorded during lockdown?

MM: All of the EPs were recorded during lockdown. One of the advantages of not doing live shows was the fact that we could concentrate on writing and recording and lockdown gave us this space.

ACR:EPA is a tribute to Denise Johnson, who sang with Primal Scream, New Order and others in addition to your records, and it really shows off her range. She's known for her amazing voice but what is something else people may not know about her that she should be remembered?

Donald Johnson: When ACR play live she would not leave the venue without saying thank you to everyone who was involved. When she was not on stage, she would be playing percussion at the side of stage with a big smile. At the start of every trip on the tour bus she would bring treats for everyone. We miss her so much.

MM: We thought that Denise’s performance on "Feel No Fear" was her Shirley Bassey moment. EPA was recorded in 2 days the weekend after we finished ACR Loco. We actually recorded 5 jams in those 2 days and you will hear the fifth one on EPR. Denise was a real pro and nearly every vocal take you hear is a first take. You can hear us all cheering at the end of "Down & Dirty" and Denise saying “I enjoyed that." We wanted to keep all her laughter and mistakes in the mix, which are things you would usually tidy up, because it highlights the real Denise, always laughing and smiling and full of passion.

ACR:EPC is dedicated to Andrew Weatherall and the art of collaboration. Were there guidelines to elements, BPMs, that sort of thing for the EP or specifically for "The Guv’nor" to make things more Weatherallian?

MM: Andrew had just left us when "The Guv’nor" was written and his single "Unknown Plunderer" had just been released. I had been playing it out a lot when me and Jez DJ as ACR Soundsystem. "The Guv’nor" is inspired by that tune in particular and Andrew’s lower tempo dub style stuff. It’s 108 BPM and would have fitted in well with one of his and Sean Johnson’s sets at A Love From Outer Space.

Is there an ACR track, new or old, that you wish Andrew could've remixed?

MM: That’s easy, "Waterline." Andrew included "Waterline" on his 2000 Nine O’ Clock Drop compilation and to think that he used to listen to ACR after dropping a microdot is something else. We found out when that album was released that he had always been a fan of ACR’s, and him and his mates used to follow us around the country and dress in khaki shorts and military gear to look like early ACR.

Do you have a go-to Weatherall remix or production?

MM: Andrew’s last piece of work "Unknown Plunderer" is awesome. It’s got all the elements in there; heavy bassline, trippy noises, dubbed up, great guitar, 116 BPM which is a great tempo because it crosses over into a number of genres. Most people would expect you to say something like Screamadelica because it has our Denise all over it (she makes that album), but that would be too obvious. His most unobvious stuff is the best. Be fearless as he used to say.

The final EP is described as "Anything Goes" but if you were pressed on the subject, as you've sat with it more, has a more specific theme emerged?

DJ: EPR was about letting go and having no defined boundaries experimenting and seeing where these songs would take us.

MM: As with all the EPs, EPR was written and recorded very quickly in the studio. It’s the only EP which hasn’t really got a theme and it works because of that. All the tunes on it are very different. Tony’s Sax on "$ouls in the City Part 2" is amazing. It’s also very fast at 168 BPM and if we had sped it up a few more BMP it would have strayed into Drum & Bass territory which would have been a first for us. The EP sounds like each track could be a totally different band.

Speaking of saxophone, of all the EPs, brass plays the biggest part on EPR. Was that by chance? You're right, Tony Quigley's sax on "$ouls in the City" is particularly fierce.

DJ: Brass, percussion, and  electronic sounds have always been a big part of our sonic landscape. All those elements kind of fell into place on "$ouls in the City" -- "fierce" is a brilliant description, that was exactly what we wanted the Sax part to be.

MM: Tony has been amazing on these EPs and he can transform a song with a simple melodic line. The fact that we have trumpet and sax at our disposal means we can make songs sound like all the fantastic music we have listened to over the years with horns in them. Tony used to mainly play soprano on earlier ACR stuff but we convinced him to get his tenor out because it sounds so dirty.

Speaking of "Souls in the City," what can you tell us about that track and the two parts that comprise it?

MM: "$ouls in the City" had the working title “Weather Report” and that’s because it started off with Don’s favourite Weather Report drum beat. It was really slow at 84 BPM which gave us scope to double the tempo. It’s something that we did on "Friends Around Us" on ACR Loco which worked really well. We had been listening to "Summon The Fire" by The Comet is Coming and we wanted to do something like that with a dirty sax leading it. "Part Two" lent itself to Tony’s vibe and he added that dimension to it that we were hearing in The Comet is Coming. It was originally "Part 1" followed by "Part 2" but we decided to flip it and start off fast and then slow down.

When you think of "EP" what, or what records, immediately come to mind?

DJ: An EP is a chance to look in-depth into an artist’s work and a chance to change some perceptions of what you do and who you are.

MM: Extended Play, I love that name, it’s so old fashioned. I love EPs, they are such good value for money and fit great on a 12". EPs I have recently bought are:

You're playing a few festivals this summer and have rescheduled your tour for this fall. You've got a LOT of new music to consider for the setlist. What songs from ACR Loco and the EPs are locks for audiences to hear live?

DJ: With us it’s always about getting the balance right - we have such a large back catalogue so we tend to have a fluid "squad" of about 30-40 songs that we can put into a set. So far… "Emperor Machine," "Berlin," "Yo Yo Gi," and "Taxi Guy" are in the squad, but it’s still a work in progress.

MM: One of the things about writing in the studio is you then have to learn to play those songs and transfer the feel and production to a live situation. Sometimes it can be like being in a covers band trying to learn someone else’s songs. It’s good fun but can also be hard work. Some songs will never transfer to live and some will take to it like a duck to water. We have over 40 year’s-worth of music to choose from but the most exciting music to play is our new stuff. When we rehearsed recently, we added new songs to the set and realised how good it was playing new material again. I would love to go out and play just ACR Loco at one gig, the 3 EPs at the next and then maybe Sextet at the next. It isn’t mentally and physically possible, though, as you would have to rehearse for weeks and you still wouldn’t remember everything that you have to play in each song. It would have to be improvised to a certain extent to make it work. It’s going to be hard to do any of the songs we did with Denise, and as well as the songs Donald has mentioned we may have a go at: "Down and Dirty," "Wonderland," "Keep it Together" and "$ouls in The City Part 2."

A new exhibit on NYC's early-'80s music scene just opened at the Museum of the City of New York, and among the items is the flyer for your 1982 Danceteria show where Madonna opened for you. What do you remember about that night?

MM: Things I remember about that night: 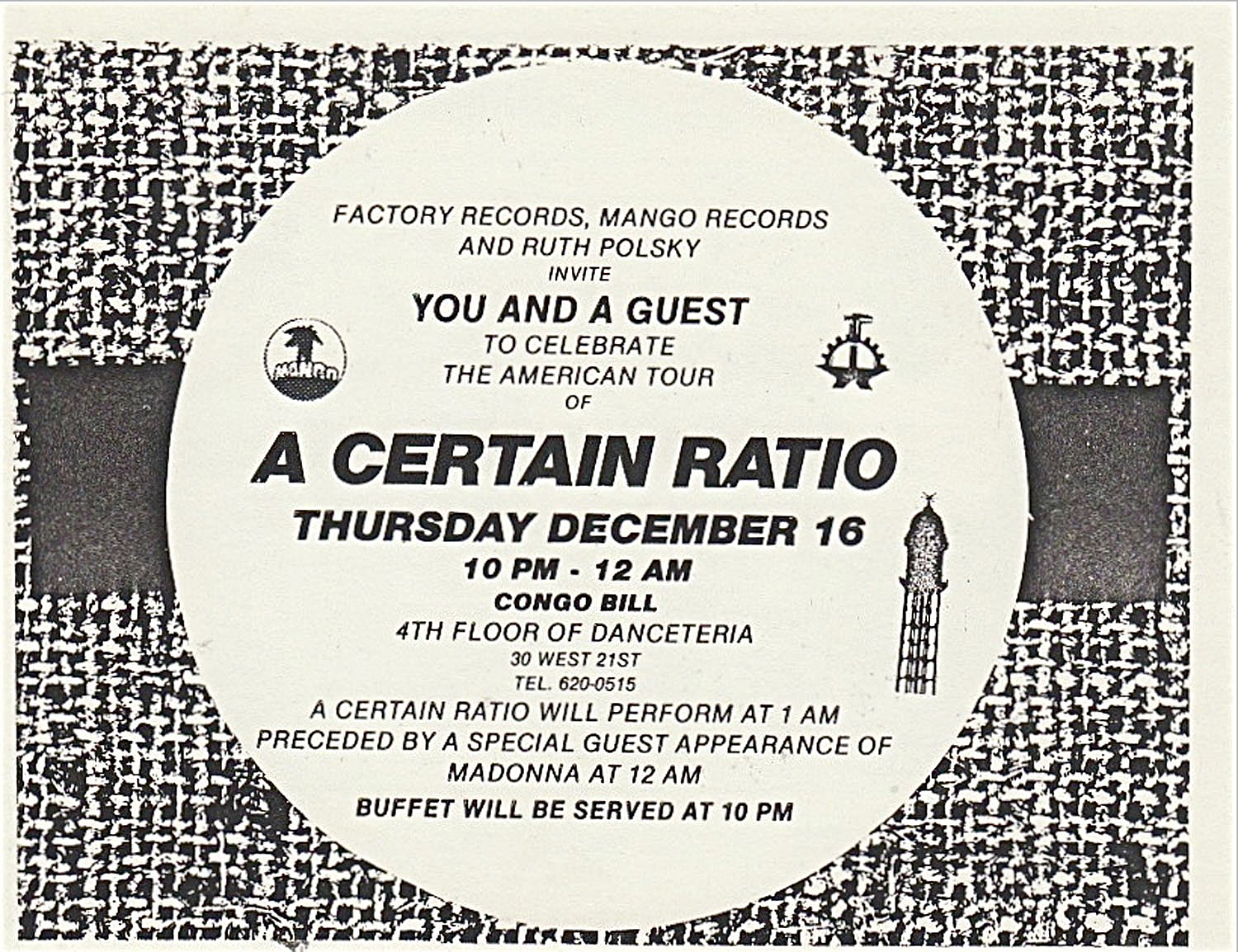 Is there anything else we should know?

MM: Manchester has always been a party city, it’s been a party city for centuries. It’s been famous for people having it large at the weekends and wanting to have a good time. We are proud Mancunians and Prog Genre Benders.