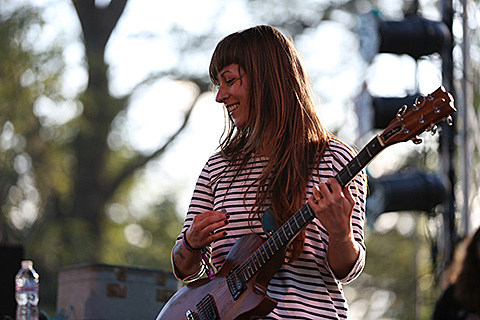 Into It. Over It. and Lemuria have announced that they'll be going on a tour together in November and December, all dates of which are listed below. The tour doesn't hit NYC but both IIOI and Lemuria will be in the NYC-area this weekend separately to open for two different emo legends. Into It. Over It. are opening night 2 of American Football's 3-night run at Webster Hall this Saturday (10/11) (sold out). That same night, Lemuria will be in Asbury Park for the BrooklynVegan-presented Lifetime show at The Stone Pony which also includes Mouthpiece and Spraynard (also sold out).

Lemuria will return later in the year on their run with a band from Austin called Prince (not to be confused with, you know, Prince), hitting Brooklyn Night Bazaar on December 20 for a free show with more bands TBA. Their full tour schedule is below. In related news, main IIOI member Evan Weiss, who's producing the new Jazz June album (due 11/11 via Topshelf), is now also reissuing their classic 2000 album, The Medicine, on his Storm Chaser label. It's coming out on October 28 as a split release with Topshelf for its first time ever on vinyl. You can pre-order it via Topshelf and Storm Chaser.

The Jazz June's only live dates at the moment are a TBA FFF Nites show in Austin and the official 2014 BrooklynVegan CMJ showcase happening October 25 at Baby's All Right with Pity Sex, Beach Slang, Cayetana and Sport. Tickets for that show are on sale now.

* Lemuria w/ LIfetime, Mouthpiece, Spraynard
# Lemuria w/ Into It. Over It.
^ Lemuria w/ Prince (of Austin)

Filed Under: Evan Weiss, Into It Over It, Lemuria, Prince (from Austin), The Jazz June
Categories: Music News, tour dates
Comments
Leave A Comment
Back To Top
RELIVE IT: The 2019 Coney Island Mermaid Parade in pics
Gary Numan says he earned only $50 from a million streams
‘Freaks & Geeks’ coming to Hulu with full original soundtrack
40 New Songs Out Today
Julien Baker talks mental health on new podcast (listen)
The original ‘Muppet Show’ coming to Disney+ (all 5 seasons)
Watch Yams Day 2021 in full