photo: Into It Over It at Irving Plaza in December (more by Mimi Hong) 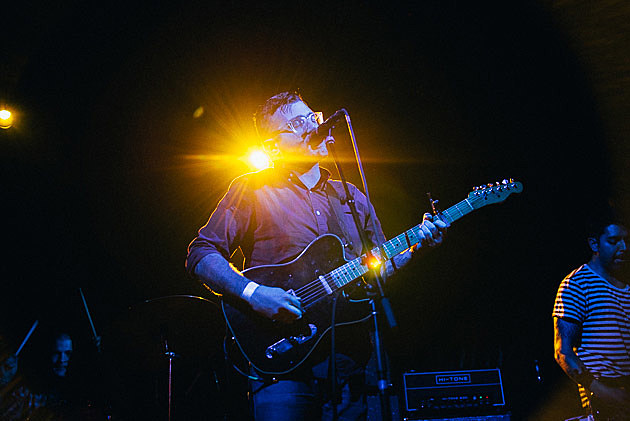 Evan Weiss' band Into It. Over It. are set to release their third album, Standards, on March 11 via Triple Crown. It was produced by indie vet John Vanderslice, who's also produced records for himself, The Mountain Goats, Spoon and more, and Vanderslice's earthy touch is certainly noticeable on lead single "No EQ." It's the kind of indie rock that's not too dissimilar from Vanderslice's past collaborators (and former Barsuk labelmates) Death Cab for Cutie, but with busy, frantic drumming that brings Evan's math rock past to mind. It's good stuff -- check it out below (via Noisey).

The band also just announced a lengthy North American tour with the great lineup of The World Is A Beautiful Place & I Am No Longer Afraid To Die, The Sidekicks, and Pinegrove. It kicks off right after IIOI play SXSW.

The tour hits NYC on April 22 at Irving Plaza. Tickets for that show are currently on Live Nation/Music Geeks presales (passwords = "ICONIC," "musicgeeks") and the general on-sale begins Friday (1/15) at 10 AM. All dates are listed below.

Filed Under: Into It Over It, John Vanderslice, Pinegrove, The Sidekicks, The World Is A Beautiful Place And I Am No Longer Afraid To Die
Categories: Music News, tour dates
Comments
Leave A Comment
30 New Songs Out Today
The Fest 20 lineup: Hot Water Music, Bouncing Souls, AVAIL, Samiam, Piebald & MUCH more
33 New Songs Out Today
Into It. Over It. announce tour with Couplet & Pool Kids, releasing split with Hikes (hear new single)
What’s Going on Wednesday?
John Vanderslice forms new band ORANGEPURPLEBEACH, preps debut LP (stream a track)