"Noncerts is a charity-based concert series in Brooklyn, NY. The idea is to bring together some of the finest musicians in the area to back-up prominent songwriters, putting established artists in a unique musical environment while encouraging community and collaboration."

BrooklynVegan is proud to be on board as co-presenter of this new series conceived by Dave Godowsky who is also performing at the inaugural event on February 20th at Cameo Gallery alongside David Dondero, Gene Ween, and Hamilton Leithauser of the Walkmen! Those great men will be backed by an unbelievable house band comprised of Pico Alt, CJ Camerieri, Dave Godowsky, Jesse Harris, Marika Hughes, Lev "Ljova" Zhurbin, Ben Lester, Eivind Opsvik, Jenny Scheinman, and Doug Wieselman! It will be a special night, with all the money going to charity, and tickets are on sale now. 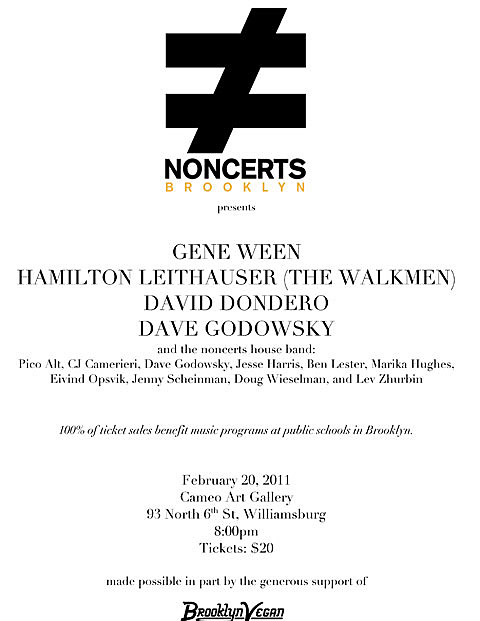