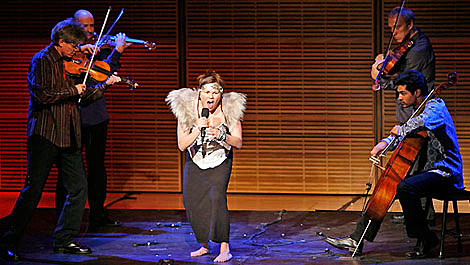 Award winning performer Tanya Tagaq will embark on her first U.S. solo tour in August to showcase her unique style of Inuit throat singing....The Nunavut-born singer has gained notoriety through partnering with the world's most groundbreaking artists, including a successful 2008 tour that she co-wrote and performed with the Kronos Quartet, aptly titled "Nunavut." She also worked with the multi-talented Mike Patton (Faith No More, Mr. Bungle) and her latest record Auk/Blood was released through his label Ipecac Recordings (Sept. 2008). Icelandic visionary Björk took an interest early on to Tanya and brought her on her Vespertine tour in 2005. [On her solo dates] Tanya will be performing alongside SF-based drummer Scott Amendola and Vancouver violinist Jesse Zubot.

In NYC, Tanya Tagaq will be appearing on Wednesday, August 19th at Lincoln Center's Out Of Doors Festival at the Damrosch Park Bandshell. She'll also be playing the next day (August 20th) at the National Museum Of The American Indian Pavilion (near Battery Park).

Lincoln Center's Out of Doors Festival kicked off last night (8/5). Full schedule at their site. All events are free.

Check out a bunch of videos of Tanya, and all tour dates, below...