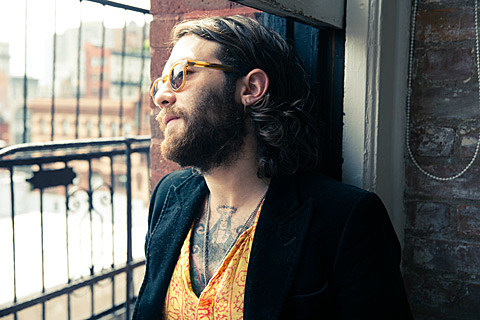 New York singer songwriter Jared Samuel, who has played with Martha Wainwright, Sharon Jones, Cibo Matto and Ghost of a Saber Tooth Tiger to name a few, makes music of his own as Invisible Familiars. His music is quirky, poppy and danceable as you'll be able to hear when Invisible Familiars' debut album, Disturbing Wildlife, comes out January 27 via Other Music Recording Company. The record features guest appearances Robbie Mangano, Tim Kuhl, Jolie Holland, Cibo Matto's Yuka Honda & Miho Hatori, Nels Cline, Ryan Sawyer, and Stuart Bogie from Antibalas. You can check out album track "Clever Devil" and the video for single "Heavenly All," below.

Invisible Familiars have a bunch of NYC-area shows coming up, including a free afternoon show on Sunday (12/14) at Union Pool in the front room. Sweepstakes also play and things get underway at 2 PM. Then the band will play three week residency at Brooklyn's Bar Lunatico (486 Halsey in Bed Stuy) on January 9, 16 & 23. The first of those (12/23) is Jared Samuel solo with "members of Levon Helm Band + Atoms For Peace"; the other three shows there are band shows. Then Invisible Familiars play Baby's All Right on January 30, other acts TBA.

They'll also play December 21 at The Rod & Gun Club with Vic Thrill. There are a couple other Invisible Familiar shows on the horizon and all dates are listed, with song stream and video, below...