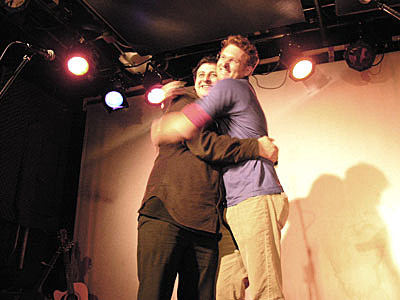 For over 5 years, Eugene Mirman and Bobby Tisdale's weekly comedy showcase Invite Them Up has been bringing New Yorkers the best comedy (and sometimes music) on the planet. But as mentioned earlier, Invite Them Up will cease operations on February 27th, 2008. And although this loss will leave a huge hole in the comedic soul of NYC, Eugene and Bobby are saying goodbye by giving us three nights of comedy and music beginning Monday 2/25 (tonight)

Obviously such a renowned comedic institution like Invite Them Up won't die quietly. These final three shows will feature line-ups so insane that I'm not going to bother to mention a single participant. I won't even bother to mention a few of the lesser known names and append that with the vague "Plus Special Guests". These three nights' line-ups are comprised of special guests only. Want an idea of how good the line-ups might be? Take a look at their More Info Page and let your imagination run wild.

As with all other installments of Invite Them Up, each show will conclude with a wonderful afterparty featuring a different guest DJ each night. Comedian Craig Baldo is confirmed to DJ the 2/25 afterparty. To accomodate the legions of comedy fans that will stick around for these afterparties, the bar and the showroom will both stay open after the show.

But that's not all. They're going to make a large time capsule. They'll mostly have comedians put stuff in relating to the show, comedy, or this point in time, but Eugene and Bobby would like to Invite the audience to bring stuff for the time capsule too! Bring something. They'll be collecting the stuff over all three nights.

Despite previous reports, there is now no official closing date for Rififi. Nate Sloan at the NY Press reports....

"Whether or not the liquor license will be revoked is up in the air," explains Antonio. "The owner is making an effort to keep Rififi open, and it seems as though Rififi will remain open for at least another four or five months and could remain open permanently if the license is saved and hopefully will continue to operate as it has been."

This means the departure of Invite Them Up leaves Wednesday nights open for a brand new show. What will the show be? Who will curate it? With a little bit o' luck, I'll have the answer real soon....

.Check out some now-classic videos from Invite Them Up below....

Invite Them Up 5th Anniversary Animation