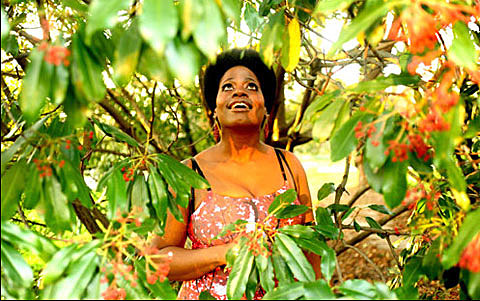 You might know the powerful and soulful voice of Brooklyn's Inyang Bassey [pronounced E-yang] from her work with Moby. Maybe you caught her in October at the Brooklyn Soul Festival, or when she was a guest of Yo Gabba Gabba at one of their Radio City Music Hall shows that same month.

You definitely know Binky Griptite, if not by name then at least by the band he plays guitar (and emcees) in named the Dap Kings who most notably back the one and only Sharon Jones. Binky is now also backing Inyang for a new solo project that perfroms live at Rockwood Music Hall in NYC tonight (2/21). They're on at 7:30pm, so don't be late.

In related news, Moby put out a free EP last week along with the announcement that his new full length album is called 'destroyed' and will be out in May, not long after he speaks about photography at National Geographic in DC.

A selection of Inyang, Binky & Moby videos below...