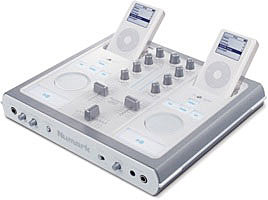 "Numark's iPod DJ Mixer I posted about in April has moved quickly from prototype to product. Officially announced today, the iDJ is slated to ship Q3 for a suggested retail price of $399. Unfortunately, the apparent lack of pitch control pretty much kills its chances of replacing CDJ or vinyl decks. Gear Junkies has the details." [Boing Boing]