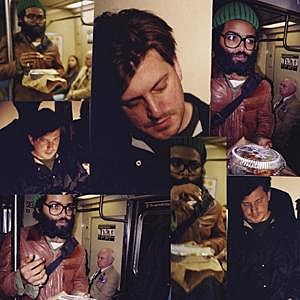 Iran has nothing in common with The Muslims.... I mean, except for the fact that the two (bands) are playing the Narnack showcase together with Lee "Scratch" Perry during CMJ at Santos Party House on October 25th.

Who is Iran? Add one Aaron Aites, one TV On the Radio (Kyp Malone), a dash of The Mendoza Line (Peter Hoffman), and a little bit from Grand Mal (Aaron Romanello) and you have a band prepping their third currently-untitled album for Narnack Records.

Produced by David Andrew Sitek (another member of TV on the Radio and producer of the Yeah Yeah Yeahs' Fever to Tell), the album is being recorded at Gigantic Studios in Tribeca and will be released through Narnack Records. ...Aites described the new album as "very hi-fi", and "more structured" and "fully fleshed out" than their previous two outings, Iran and The Moon Boys. He also said it's more lyric-based (in the vein of The Moon Boys), with material sounding "louder and grimmer." They're also planning a single release for "Buddy", but have no firm release date for that either.

OK, no release date yet... but we do have the track, "Buddy", right now. Download it above.

When Kyp Malone isn't playing with Iran, he could be busy controlling the weather or putting out one of the biggest albums of the year, or playing Letterman or touring.

In related news, Tunde Adebimpe (also of TV On The Radio) (and a movie star) & Kyp Malone are set to eat books with Department of Eagles, Paul Simon, Parkey Posey and Bobby Cannavale at Town Hall on Oct 7th. Tickets are still available.

No other Iran live dates that we know of at the moment.