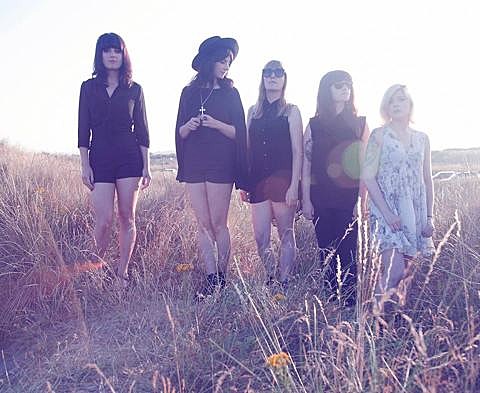 Let's just get this out of the way: Yes, it's another "______ Girls" band who draw inspiration from Phil Spector, VU and JAMC/C-86, but Dublin, Ireland's September Girls are quite good at what they do. (Yes their name comes from the Big Star song "by way of The Bangles.") Four of the five members (two of which were in The Chalets if you remember them) write and sing so there's some variation in the songs. Their debut album, Cursing the Sea, came out a couple weeks ago in the UK via Fortuna Pop (home of Joanna Gruesome and Shrag). I'm pre-disposed to like this kind of thing but I think it's definitely superior product. You can stream the whole thing via Spotify and check out videos for "Heartbeats" and "Green Eyed" below.

September Girls will be making their first visit to North America in March to play at SXSW. No other dates along the way have been added but I'm hoping they play NYC too. They've got a few UK dates as well and all are listed below.