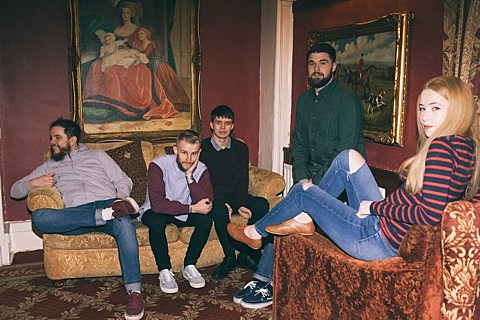 Ireland's The Winter Passing are on tour now with their Richmond, VA-based 6131 labelmates Teen Death. They just hit The Fest over the weekend, and the tour lands in NYC on Friday (11/6) at Aviv with PWR BTTM, Mumblr and Nonsense. Tickets for that show are on sale now. They'll hit PA tonight (11/5) and Richmond on Saturday (11/17). All dates are listed below.

The Winter Passing released their first full length, A Different Space of Mind, this past September, following a 2013 EP and a 2012 split with Forrest. They're led by siblings Rob and Kate Flynn on co-lead vocals, and they offer up a raw-but-clear blend of the kind of emo and punk you usually associate more with the Midwestern US than Ireland. Rob's voice is a dead ringer for Matt Pryor of The Get Up Kids, and while male/female vocals and TGUK comparisons might make you say, "Oh, so they sound like The Anniversary?", they actually don't. Their influences are clear -- they reference Brand New when they lift the melody and lyrics "I can't shake this little feeling, I'll never get anything right" from "Degausser" on "Nowhere Still" (they also have a song called "Daisy" for that matter) -- but The Winter Passing give it their own twist. It's a good record and you can stream it in full, with some videos, below.