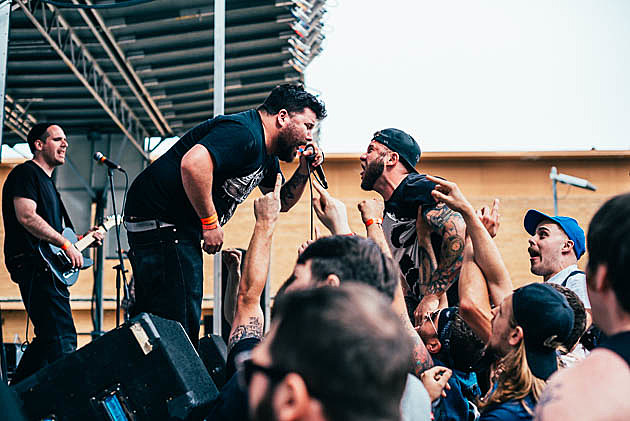 Long Island punks Iron Chic just played NJ's Skate & Surf last weekend (as pictured above), and they already had a bunch of other announced NYC-area appearances coming up after that. Now they've added one more, opening one of Face to Face's three NYC shows this weekend. Those shows have Face to Face playing their first three albums in full, one a night. Iron Chic are on night 1, the Don't Turn Away (1992) night.

Night 2 (1994's Big Choice) has Royal Psalms, a new band with members of Crime In Stereo, Daytrader and Aficionado. And night 3 (1996's self-titled LP) has post-With Honor melodic hardcore band Ambitions, whose sole album was 2007's Stranger on Bridge 9. Tickets for all three shows are still available, but three-day passes are sold out.

Iron Chic also play the Long Island stop of Treasure Fleet's tour at Mr. Beery's on Saturday (5/23) with Broadcaster and more ($8 at door). Then they play a free NYC show at Riis Park Beach Bazaar on May 30 with Soda Bomb and Somerset Thrower. After that, they open for Gin Blossoms at Long Island's Paramount on July 10 with Timeshares (tickets), and then play LI's Today's Mixtape Festival in August with The Movielife, Andrew WK, Incendiary and more (tickets).

Speaking of Timeshares and The Movielife, they also have a NJ show together.

Updated Iron Chic dates are listed, with a video and a stream of Don't Turn Away, below...