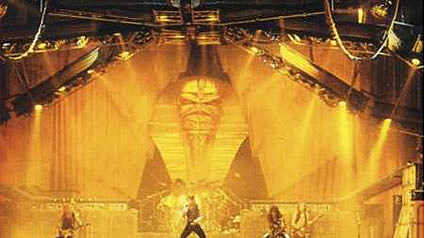 To tie in with forthcoming 2008 releases on DVD of the classic "Live After Death" concert video (full details coming soon) this tour, aptly entitled "Somewhere Back In Time", will revisit the band's history by focusing almost entirely on the '80s in both choice of songs played and the stage set, which will be based around the legendary Egyptian production of the 1984-85 "Powerslave Tour". This will arguably be the most elaborate and spectacular show the band have ever presented, and will include some key elements of their "Somewhere In Time" tour of 1986/7, such as the Cyborg Eddie. [Blabbermouth]

Tickets for the March 14th show at the Izod Center aren't on Ticketmaster yet, but California & Toronto go on sale soon. There's also a fan-club-only pre-sale on Tuesday. All tour dates below....