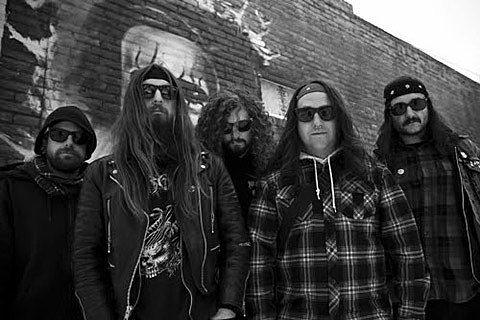 Given that Iron Reagan consists of current and former members of two very well-established metal bands (namely Municipal Waste & Darkest Hour), it's no surprise that they're on their way up so quickly. Formed just two years ago, this straight-ahead crossover thrash act has already built a substantial national following and adopted an aggressive tour schedule.

To wit: the band have announced their recent signing to the storied Relapse Records (who have been snatching up bands left and right lately -- they've signed IR, Torche, The Drip, Atriarch, & Nux Vomica this year alone). They've also announced an extensive run of live dates through March and April, with accompaniment from Occultist on most of the dates and Ghoul on a handful as well. The dates with Ghoul wrap up with an appearance at the aforementioned Tankcrimes Brainsqueeze festival; you can stream the Invisible Oranges-debuted Tankcrimes compilation of fest participants below.

Iron Reagan aren't hitting NYC on this run, unfortunately, but they'll be putting in a number of appearances at SXSW: the Pitchfork showcase on 3/11, the Converse/Thrasher show on 3/13, the MetalSucks showcase on 3/14, and the Tone Deaf showcase on 3/15. They're NOT appearing at the second annual Invisible Oranges showcase, which will feature Black Tusk, Mutoid Man, Kayo Dot, Yautja, Wild Throne, & Venomous Maximus on 3/13 at the Quantum Lounge.

Stream that Tankcrimes comp and check out the full run of Iron Reagan dates, listed below...