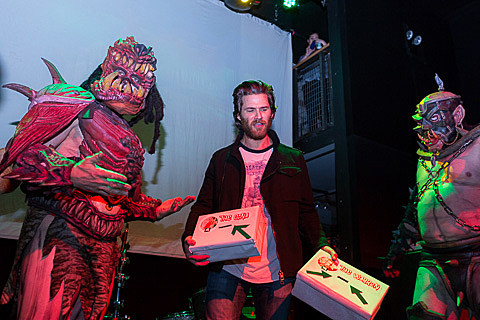 GWAR (Oderus Urungus) are always keeping busy with stuff that pushes them beyond the category of just being a band and into the realm of art collective or something like that, and as usual there's a ton of stuff going on the in GWAR universe right now. First and foremost, GWAR are a great live band, and they've been on tour for much of the fall, recently stopping in NYC for a show at Webster Hall on 11/15, where they were joined by Born of Osiris and Battlecross. GWAR guitarist Pustulus Maximus joined Battlecross during that show to cover the Pantera classic "Fucking Hostile." Though GWAR didn't play Pantera frontman Phil Anselmo's Housecore Fest this year as they have in the past, Sleazy P. Martini did host a screening of the GWAR movie Skulhedface at the film portion of Housecore, which just went down last weekend. Oh and Anselmo's other band Down did play GWAR-B-Q this year, so clearly they're all still friends.

Speaking of GWAR covers, they've been frequent contributors to the AV Club's "Undercover" series, but yesterday the tables were turned when Iron and Wine covered GWAR's "Sick of You," which was about as quiet and acoustic and funny as you would expect. GWAR contributed a cover of Cundi Lauper's "She Bop" to the series back in October. Watch both below.

And in terms of expanding their universe, current lead singer Michael Bishop aka Blothar has started a marketing firm with Richmond-based artist Joe Adkins called Misery Brothers, who have made their first ad for the Richmond-based "Texas Beach Bloody Mary Mix." It seems like a GWAR video even though Adkins claims that Misery Brothers are technically not affiliated with the band. The spot was shot in GWAR BAR (which is, you know, their bar in Richmond) and is a gory, hilarious commercial that features the character TOMATOFACE, who might as well be a GWAR member, as his costume was created by Corrotted Artistry, the Richmondy company that builds all of GWAR's costumes. These guys have their hands in a lot of things down there, and this is just the latest example.

And finally, GWAR also have a book out, because of course they do. It's called Let There Be Gwar, and is a sort of art-book/comprehensive history of GWAR and all related projects and companies and such. It was spearheaded by Bob Gorman aka "Muzzle Slave" (people associated with GWAR who aren't actually in the band are known as " GWAR slaves", just so you know) but features input from a bunch of people and supposedly took about 17 years to put together. It has a bunch of photos, interviews, posters, art and apparently a lot of blood, and is currently available for purchase.

Check out the Pantera cover, the Iron and Wine cover, the Cyndi Lauper cover, and the bloody mary commercial below...