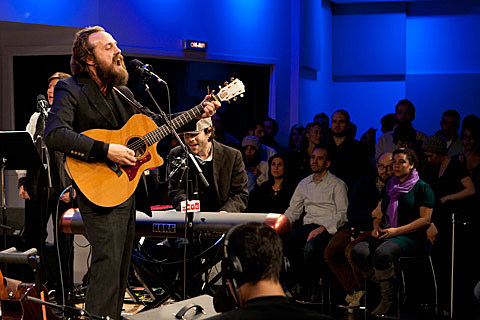 Friday, January 28, 2011
7:00 pm - 8:00 pm - Live from SoHo: Iron and Wine
Iron and Wine's Sam Beam has become one of today's greatest musical storytellers, crafting meticulous tales full of forlorn love, religious imagery, and wistful dreams. Join us at the Apple Store for this very special live show by Iron&Wine as they perform tracks from the newly released album, "Kiss Each Other Clean." For guaranteed admission, stop by to pick up a wristband starting Thursday, January 27, at 9:00 a.m.
[Apple Store SoHo]

The free NYC Apple Store show is happening one day before Iron & Wine play their headlining show at Radio City Music Hall with Edie Brikell. Tickets are still on sale for that.

Meanwhile, those with a TV can check out Iron & Wine on Conan tonight (1/24), and those who either live in California or have an internet connection, can partake in a free show at Amoeba Records in Hollywood.

Iron & Wine (AKA Sam Beam and band) perform live at Amoeba Music Hollywood in celebration of the new album, Kiss Each Other Clean, out 1/25 on Warner Bros. This very special show will also be streamed live on amoeba.com for those who can't be there!

Fans can pre-purchase the new album starting at 5pm on 1/24 and receive a limited-edition Iron & Wine "Live at Amoeba" poster (while they last). Signing after the performance is limited to the first 100 purchasers.

Cold War Kids play live in Amoeba on Tuesday (though it won't be streamed), and they have a Radio City show coming up too. Their new album, Mine is Yours - out that same day, is streaming at MySpace. Iron & Wine's new album is streaming at Team Coco.