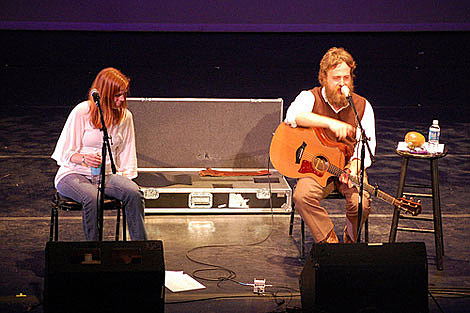 "This tour, which found Sam Beam playing the relatively intimate Abrons Arts Center on the Lower East Side, made for an odd starting point: the set list abounded with rarities, and Beam would occasionally pause mid-song if a line or chord hadn't gone as planned. The overall effect, though, was charming, and I was reminded of exactly why I'd been drawn to Beam's music from the beginning. And given just how forceful his vocal delivery was on many of the songs, it looks like my "well, maybe I won't get tickets for the show at the Bowery Ballroom/Webster Hall/etc" mindset was, in fact, completely wrong. Highlights included "The Trapeze Swinger" and "Sodom, South Georgia," both of which were searingly played and sung." [Tobias Carroll]

The NYC shows were May 17th and 18th (last night). "Around the Well", a new Iron & Wine 2-CD rarities comp, is out today via Sub Pop. You can download two of the songs for free above.

Iron & Wine's upcoming shows include the Newport Folk Festival, ATP NY, and an Other Music in-store... today (5/19). They'll also be on Jimmy Fallon tonight. All dates, and some videos from Abrons Arts Center, below...