"saw iron & wine at radio city last night. show was amazing. it was an electric rock show with a huge band. sam pulled it off." - travis johnson 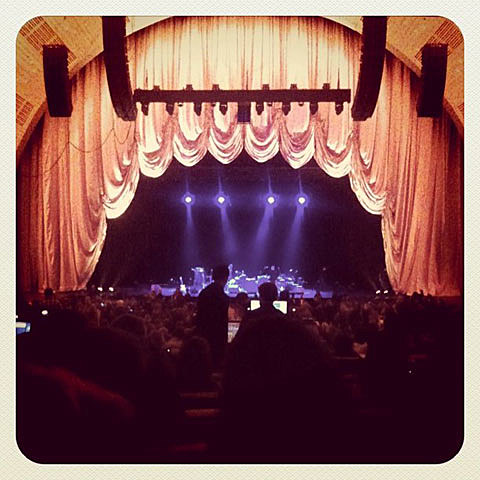 "Iron and Wine kind of blew it last night. When an artist goes for a sound more or less the polar opposite of the one that made them famous, they better bring their A game. Sufjan did it last year, sadly Iron and Wine did not. Bloozy sax rock is not where its at man. 75 minute sets at a sold out Radio City at 50 a ticket aint too great either. That said, some of the new stuff was great, and the Trapeze encore was wonderful." [Anonymous | January 30, 2011 1:25 PM]

Edie Brickell opened for Iron & Wine at Radio City Music Hall in NYC Saturday night, one night after the same band played a much more intimate and free (and even shorter) show at the SoHo Apple Store. More tour dates are HERE. The Radio City setlist, and video of the "Trapeze Singer" encore, are below...

Iron & Wine Concert @ at Radio City Music Hall, New York on January 29, 2011 - setlist
He Lays in the Reins
Fever Dream
My Lady's House
Naked as We Came
Half Moon
Big Burned Hand
Love and Some Verses
House by the Sea
Sea and Rhythm
Tree by the River
Boy with a Coin
Me & Lazarus
Cinder & Smoke
Summer in Savannah
Rabbit Will Run
Glad Man Singing
Encore:
Trapeze Swinger