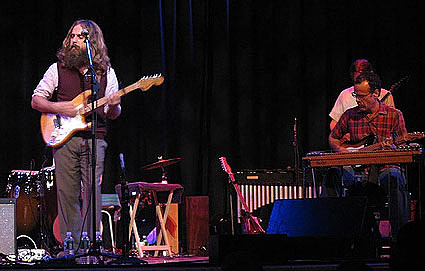 While I did enjoy the show, I can’t really say that I flat out loved it for a couple of reasons. First off, there was very little between song stage banter, which is more or less fine for a place like Town Hall, but I thought he could have engaged us just a little bit more — maybe a few anecdotes about the new songs or something like that. Also, he is not the most charismatic stage performer, and given his music, I wasn’t exactly expecting David Lee Roth like antics, but frankly, there was just a little too much ass to the audience jamming for my liking. [says Bumpershine]

Iron & Wine's new LP The Shepherd's Dog is out now. Their recent DC appearance is streaming at NPR. They'll be on the David Letterman show on October 5th. All tour dates below...