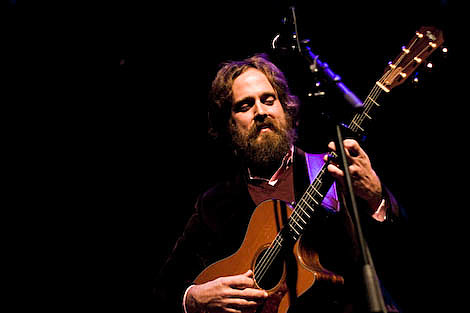 Beginning March 6th and running thru March 30th at www.ironandwine.com, fans can vote by city and night for the songs they'd like to see performed each evening. For those who can't attend, the shows will be made available after the tour is completed, in some cases days after, on Iron and Wine's official live recording site Played Last Night. Tickets for all these shows go on sale February 20, 2009.

The tracks collected on Around the Well span from Iron and Wine's earliest sessions which yielded the band's debut (2002's The Creek Drank the Cradle) through material recorded for 2007's The Shepherd's Dog. The double-disc collection is broken up into two sections. The first half is an assortment of hushed home recordings, unedited and raw, and the second highlights moments captured in the confines of proper studios with the help of other musicians, friends and engineers.

The album's title comes from a line in the song "The Trapeze Swinger," a fan favorite which was written for and included in the movie In Good Company. Three more songs written and recorded for the film finally make their appearance here as well: "Belated Promise Ring," "God Made the Automobile" and "Homeward, These Shoes." Around the Well also brings together hard to find covers such as The Flaming Lips' "Waitin' for a Superman" and New Order's "Love Vigilantes," along with one of Iron and Wine's earliest originals, "Sacred Vision," which appeared on a compilation for Sound Collector magazine..

In addition, Iron and Wine have begun work on the follow-up to The Shepherd's Dog and plan to release a new album in spring, 2010.

Tickets for all the shows are will-call only, and some of them are starting to show up on Ticketmaster. I'm not sure though, if that's where tickets will be for the NYC shows at Abrons Arts Center on May 17th & 18th. All dates, and the new album tracklist, below...

Around the Well Track Listing

Disc 2
1. Communion Cups & Someone's Coat
2. Belated Promise Ring
3. God Made the Automobile
4. Homeward, These Shoes
5. Love Vigilantes
6. Sinning Hands
7. No Moon
8. Serpent Charmer
9. Carried Home
10. Kingdom of the Animals
11. Arms of a Thief
12. The Trapeze Swinger
(Vinyl break occurs between "Sinning" and "No Moon." At nearly ten minutes, "The Trapeze Swinger" will stand alone on the third piece of vinyl.)