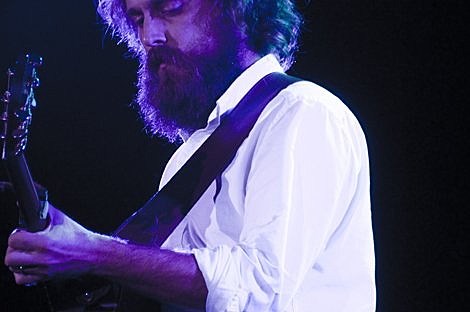 Iron & Wine kick off a US tour on Saturday (11/13) with a show in St Louis at The Pageant. It's a short trip that will be followed by a two month break. Post-break, Samuel Beam and band will play two big US album release shows before heading to Europe for a tour. Those two 2011 US shows are January 26th at The Wiltern in LA with the Low Anthem, and January 29th at Radio City Music Hall with Edie Brickell. Tickets for the NYC show go on AMEX presale Wednesday, 11/10, at 11am, and then go on regular sale Friday at 11am.

Iron & Wine's new LP, Kiss Each Other Clean, will be released on January 25th (one day before the LA show) via Warner Brothers (and 4AD in Europe, Japan, and Australia). And,

Kiss Each Other Clean's opening track, "Walking Far From Home," will be released on 12" vinyl and as a CD single that is sold exclusively through independent retailers in conjunction with "Back to Black Friday" on November 26th, in which independent record stores will be the only source for several exclusive new releases across the country.

"Back To Black Friday" is a new initiative by the people behind Record Store Day. Basically they'll be releasing exclusive records now on Black Friday (the day after Thanksgiving/the businest shopping day of the year) in addition to on Record Store Day which takes place in April.

The Iron and Wine single will also be available digitally on 11/30. In addition, 4AD will release two of those songs as a 7" on 1/17/11. Check out the teaser trailer and tracklist for the LP, as well as all tour dates below...

Track listing for Kiss Each Other Clean:
1. Walking Far From Home
2. Me And Lazarus
3. Tree By The River
4. Monkeys Uptown
5. Half Moon
6. Rabbit Will Run
7. Godless Brother In Love
8. Big Burned Hand
9. Glad Man Singing
10. Your Fake Name Is Good Enough For Me