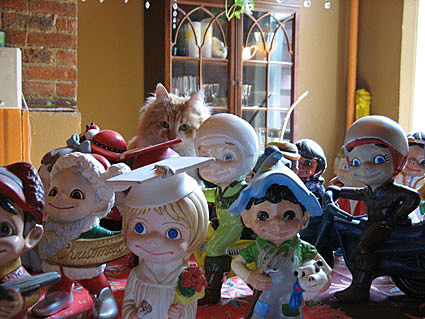 While I wanted to be glad about a live music facility in the neighborhood, Studio B has been nothing but a crappy neighbor. They seemingly have no crowd control as people enter and exit the club, and take no notice of the fact that they are located on the edge of a residential neighborhood. On show nights, people scream drunkenly up and down Calyer, or even better when the windows are open, sit on our stoops to make phone calls at extremely high volume.

Trash is strewn everywhere on nights after shows, garbage bags pile up outside for rats to run around in, graffiti that is obviously tied into the previous night's show has gotten worse (Anarchy symbol anyone?) and parking is impossible. Beer bottles end up in the planters, and someone even went so far as to steal a lily in bloom, pot and all, last summer. I love when people fuck with my car, too.

Via newyorkshitty's research on the DOB online database, it looks as though the roof garden is completely without permits, so we'll have to see what we can do from this end to make their lives a little harder. Just as they have done to everyone's lives on my street. [The Know-All]

The blogger that wrote that is also selling the "ironic" figurines pictured above on Craigslist. They're "hoping some hipster will put them in their bar or whatever".

Tickets for Yacht, Parts & Labor, Ellen Allien, Spank Rock and other upcoming shows at Studio B are on sale. If you go, don't forget to be nice to the neighbors (for Studio B's sake at least).