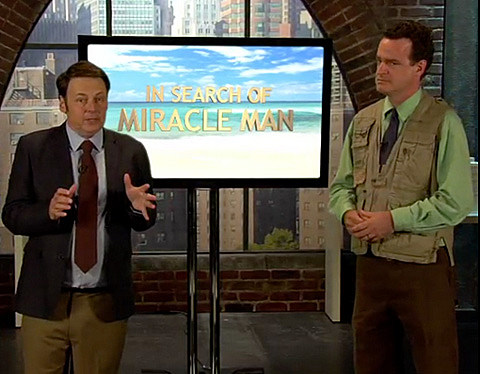 Last week, Adult Swin oddity (is that reduntant?) "Too Many Cooks" took the world by storm with its brilliantly strange (eventually disturbing) homage to TV opening credits sequences of the '70s / '80s / '90s. You may remember that Adult Swim initially aired it in a 4AM timeslot that just said "INFOMERCIAL" on cable box schedules. Last night Adult Swim aired a new "informercial" at 4 AM, this time bearing a little more resemblance to "paid programming." Starring UCB's Matt Besser and Rich Fulcher (Snuff Box, The Mighty Boosh), it's a parody of self-help programs with maybe a little Psychic Friends Network thrown in as well. Is that Steve Agee in the audience?

Who is Miracle Man and how can he help you? Well you're just going to have to watch. (It's no "Too Many Cooks," but it has its moments and fans of Besser and Fulcher will definitely want to watch.) It'll air on Adult Swim in the 4AM slot though November 14 and you can watch it via Adult Swim's website if you're a cable subscriber. Or you can watch a medium-definition rip of it over at Gawker.

Adult Swim has other "informercials" too.